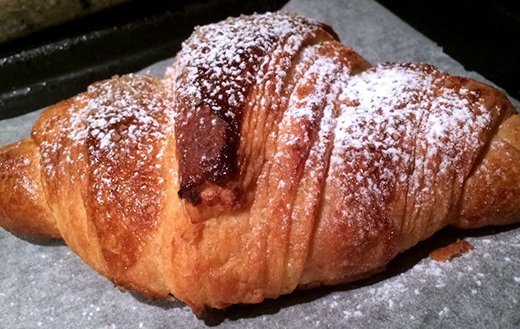 very time I decide to detox, the one food I miss the most during my miserable few hours of resistance is the fatty cornetti. It’s a love-hate relationship.

Cornetti are the Italian version of the French croissant. Both are crescent shaped, flaky, and chock full of fat and sugar. They’re also the most widespread accompaniment to caffeinated breakfast beverages we Europeans love waking up to. But this is where the similarities end.

Cornetti bear no resemblance to their butter and light French counterparts, just as the ubiquitous fagottino al cioccolato does not correspond to the French pain au chocolat.

Most Italian coffee bars don’t have in situ bakeries and have to order out. Cheap approximations proliferate. Even the identity of cornetti is indistinct, since a plethora of products go by that name. Filed under cornetti are many breakfast pastries baked in a variety of shapes, sizes and containing fillings such as jam, pastry cream, chocolate spread. These include fried donuts (whose crumb contains boiled potatoes in the dough), Danish rolls studded with sultanas, fist-size pull-apart brioches, krapfen (fried and filled with pastry cream or Nutella), puff pastry elephant ears locally called ventagli (fans), maritozzi (buns slathered with whipped cream) and whole wheat crescents containing an obscure jelly vaguely reminiscent of (and sold as) “honey.” Each of these all belong to the cornetti realm.

Every Rome corner coffee bar serves cornetti in the morning, until they run out. Whether delivered fresh from a wholesale baker in wide shallow boxes or micro-waved in back, processed cornetti pumped with preservatives and margarine are the sadly accepted norm. Usually, industrially manufactured frozen cornetti go hand-in-hand with the overly roasted, bitter espresso coffee served beside it.

Why is it that Italians — so prompt to ignite discussion on anything food-related — blindly accept the breakfast fraud? Indifference? Numbed morning palate? In truth, cornetti have deteriorated. Places that bake their own artisan products are now an exception, and a rare one at that.

But it wasn’t always the case. Cornetti, despite differing from croissants, were once delicious. Eating them after sunset was an established ritual. Gone are the days of visiting the neighborhood cornettaro after hours. This was the Roman slang expression for night-shift bakers who’d sell cornetti off the books out of the back door of their artisan pastry shops.

But a 2009 city ordinance making the selling of food illegal after 1 a.m. abruptly foiled millions of Roman nighttime cornetti consumers. That was the beginning of the end. The golden era was over.

No more 3 a.m. runs to Er Montacarichi in Rome’s suburban Via di Pietralata. To sample this joint’s warm cornetti you had to traverse a dimly lit underground garage, take the service elevator and get pulled up into the bowels of a steaming furnace where the goods were baked and sold all through the night by a team of flour-dusted bootleggers.

The interruption forced by the nighttime commerce decree thwarted quality, and over the years cornetti in Rome grew progressively worse.

Fortunately for me — and for my fellow cornetto aficionados as well as my dietician’s wallet — the fog is finally lifting. The Dark Ages of cornetti appear to be ending. So I suggest you keep an eye on these Rome places, listed alphabetically.

L’Angolo Russo This bakery in the Nomentano neighborhood is open 24/7 — one of the few in Rome — and specializes in a handful of pastries and cakes. The cornetti are no longer stellar, but are made in the back around the clock. When I want to relive the thrill of cornetti after midnight, this is where I go. • Open daily 24-hours | Corso Sempione, 13. Tel. +39.06.8680.0686. No website.

Bar Benaco I don’t know what makes Bar Benaco’s tiny and expensive cornetti so special. All I know is one is never enough, despite their steep price. Flaky, buttery, not too sweet, these all-Italian cornetti attract almost as much as the Coppedé neighborhood’s extravagant architecture. The coffee beverages — latte macchiato aside — are less impressive. • Via Benaco, 13 | Tel. +39.06.854.8636.

Boulangerie MP Chef Matteo Piras is the mastermind behind this Navona neighborhood bakery that uses only high quality ingredients, organic flours and lievito madre (sour dough) natural starter. Piras has also started offering vegan croissants and pain au chocolat at a democratic €1. Will have to go back and test out the interesting savory croissants made with butter and fleur de sel. • Via di Panico, 6 | Tel. +39 06 9357 7230

Le Carré Français The new “French quarter” just off white collar Piazza Cavour has great potential. A walk around the large space reveals a sleek restaurant surrounded by all the shops traditionally found in any French town. With more than 1,000 products on sale — from foie gras to canned crustacean soup— this promises to be the best place to satisfy your confit de canard, baguette and salted butter fantasies. Some items on the menu still need tweaking, but the choice in oysters from Brittany, Normandy and Aquitaine make up for it. The boulangerie section justly prides in its breads, flaky baked goods, and the croissants, tartlets and éclairs are spot on. • Open Mon.-Sat. 8 a.m.-midnight; Sun 9 a.m-11:30 p.m. | Via Vittoria Colonna, 30. Tel. +39.320.642.2558.

Coromandel Ornella is unbeatable. This elegant bistro’s chef is first and foremost a baker. She produces French quality croissants and pain au chocolat, plus cakes, pan brioche (which she then slices for her French Toast) and other bakery musts on a daily basis. The homemade chocolate hazelnut spread is slathered with profuse abandon. The friendly girls in aprons pouring the caffè, classy Parisian-style ambiance, terrific specials and smiling host Katia do the rest. • Open Tue.-Sun. 8:30 a.m.-3 p.m., 7:30-11:30 p.m. | Via Monte Giordano, 60. Tel. +39.06.6880.2461.

Pasticceria De Bellis In addition to delicious deserts and designer pastries created by the talented ex-cop turned maître pâtissier and cake artist Andrea De Bellis, the cornetti — when available — are made with French butter and are very, very good. • Piazza del Paradiso, 56/57. | Tel. +39.06.6880.5072.

Palombini I hardly ever make it to EUR — one of Rome’s most modern neighborhood and uniquely filled with Fascist architecture — but when I do, Palombini is always a must: the bar pasticceria (café and bakery) roasts its own coffee beans for espresso, and bakes some of the best homemade cornetti alla crema I have ever tasted. • Open daily 7 a.m.-midnight | Piazzale Adenauer, 12 – Tel. +39.06.591.1700.

Panella Best known for its bread and fine pizza by the slice, Panella also bakes a decent cornetto. The technically perfect pastries can’t however counter the staff’s generally rude manners. The best thing is getting a bag to go, and enjoying the warm cornetti with a freshly home-brewed espresso. • Open Mon.-Fri. 8 a.m.-midnight; Sun. 8:30 a.m.-4:00 p.m. | Via Merulana, 54. Tel. +39.06.487.2651

Regoli This Rome institution has been baking all sorts of pastry delights since 1916, and the house special is not properly a cornetto, rather the all-Roman maritozzo, a fragrant, oblong brioche bun that’s been slit open and filled with freshly whipped cream. Breakfast doesn’t get more Roman than that. • Via dello Statuto, 60 | Tel. +39.06.487.2812.

Romoli This bar pasticceria historically provides Pariolini (residents of the northern suburbs) with very good cornetti that boast a variety of fillings. These may include classics like pastry cream, chocolate or jam, the more exotic coconut, pear and chocolate, as well as pistachio cream, white or dark chocolate spread, fresh berries, apple and cinnamon, pineapple, and other fruit fillings. • Open Tue.-Sun. 6 a.m.-midnight. | Viale Eritrea, 140. Tel. +39.06.8632.4845.

Pasticceria San Teo This is a routine stop before (and sometimes after) hitting the weekend farmer’s market located by the Circus Maximus. Splurge on Italian cornetti baked to perfection with natural starters and no chemicals or additives, as well as other sinful confectionary goods. And for those who appreciate them, even macaroons. • Open daily 7 a.m.-8 p.m. | Via di San Teodoro, 88. Tel. +39.06.6992.0945. No website.

Zozzone a Centocelle As one of the inner city’s most popular late night hangouts, this bakery is always crowded, and impossible to park by. Blame their production of old school cornetti filled with Nutella and whipped cream. Stop drooling. • Via dei Ginepri, 16 | No phone. No website.