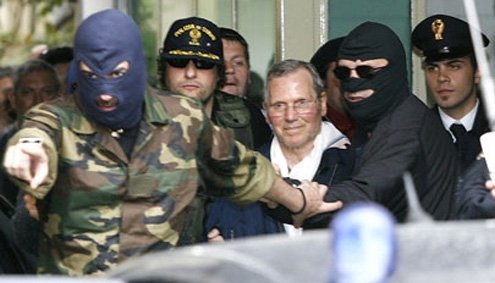 Bernardo Provenzano at the time of his arrest in 1993.
L

ike many journalists based in Italy, I have spent considerable time covering the Mafia, as well as the Neapolitan brand of organized crime — the Camorra — and Puglia’s Sacra Corona Unita. And like most journalists, I suspect, I have always rather enjoyed my trips to Sicily, which, quite apart from being a staggeringly beautiful place where the food is sublime, has also been a bit like walking on to the set of “The Godfather.”

Quite understandably, the honest people who live there rail against seeing their homeland cast in caricature by journalists trooping down for a quick fix of caponata and cannoli, but it must be said that much of what has been written, especially in the years when the clan warfare was at its zenith, is the absolute truth, with larger-than-life Mafiosi spending years on the run, priests and doctors tending to their needs in secret and vicious reprisals meted out to anyone who dared to cross them.

But however entertaining it may be to read or to write about such characters, it is of course quite a different matter when you have to live with them. I never dreamt that this would be an issue for me or my family, aside from sporadic visits to Naples to see my husband’s relatives. There, the sense of menace is an uncomfortable fact of daily life to which most Neapolitans seem grudgingly resigned.

The Camorra has its fingers in every pie, whether it be garbage collection or funeral arrangements, and does almost nothing to hide the fact. On a melancholy trip to Naples after the recent death of my mother-in-law I witnessed an extraordinarily graceless and blatant attempt by the manager of one funeral parlor to convince my husband that he should be allowed to manage the arrangements because the death had occurred on his turf.

Driving with some relief back to safe Spoleto, I was unnerved to discover, in the days that followed, that the tentacles of the Mafia are longer than I’d thought. I had known for some time that Spoleto played host to some of the biggest names in the Cosa Nostra. For more than a year, Bernardo Provenzano, the fugitive boss of the Corleone clan, was jailed in Terni, 20 kilometers from here, after his 43-years in hiding finally came to an end. And Spoleto’s own maximum security prison hosts Mafia boss Pippo Calò. People I know who work at the jail regale me with stories about the prisoners’ less than austere lifestyles behind bars. Some of the Mafiosi even keep pets.

The underworld connection here has nothing to do with garbage collection or funeral homes — at least for the time being — but focuses instead on torrents of cash that have flowed into the region for earthquake restoration. The available cash has drawn organized crime to such an extent that many of the teams of construction workers employed pay pizzo, or protection money, simply to be allowed to work.

Proof of Mafia presence, if it were needed, came when police recently discovered the decomposed body of a Sicilian gangster in the woods near Gubbio. He had been lured to the spot by another Mafioso and riddled with bullets — just like in the movies. Subsequent inquiries revealed that he and his alleged assassin headed a gang that has made its base in Umbria, deliberately chosen for its clean record and pristine image.

The gang contains members from all three of Italy’s notorious organized crime regions, who have swapped their cannoli and pastiera, rather reluctantly no doubt, for Spoleto’s anemic looking dessert, crescionda.

The headquarters of the new criminal operations is, apparently, Perugia, from which they have conducted a series of armed robberies and which acts as the center for their flourishing arms and drugs trafficking business. The boss alleged to have dispatched his erstwhile colleague in the woods of Gubbio was arrested in a well known nightclub in Perugia, as he sat drinking with several girls.

The Perugia connection comes as no surprise in Spoleto. The Umbrian capital is well known as being chockablock with freemasons. “If you want to get anywhere in Perugia, you absolutely have to join the freemasons,” a policeman friend of mine told me the other day. Shades of the P2 Masonic Lodge — the other big story that gripped the interest of many a foreign journalist down the years.