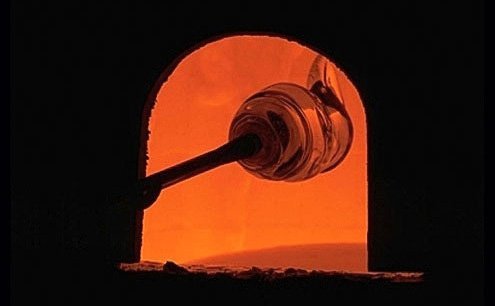 Glass-blowing in Murano is warming when the weather turns nippy. Photo by Philip Greenspun.
V

enice,” quipped Truman Capote in 1961, “is like eating an entire box of chocolate liqueurs at one go.” But Capote’s frisky remarks came when Venice had yet to come of age as an easily-accessible global destination. The airport was primitive and most middle-class Americans associated the city more with Hemingway and Harry’s Bar than mass tourism. Four decades later, it’s a watery Disneyland with nonstop flights to most EU capitals and daily service to the United States, usually through Paris, London and Amsterdam.

According to city hall, Venice averages 18 million visitors a year. That’s five million more than 2002, when then-Mayor Paolo Costa warned that Venice risked becoming Europe’s Williamsburg, the make-believe colonial settlement in Virginia. Daily visitors in August often surpass the dwindling population of the Venice city center — which was 62,000 in 2005, down from 121,000 in 1966. The lagoon’s islands, home to 31,000, have also lost half their residents over 40 years.

The city of the Doges now caters to non-Venetians, which is why winter is the only time that affords some protection from mob rule. Post-holiday burrowing, coupled with blustery, damp weather keeps the padding hordes in check before the carnival season kicks in the first week of February. Shimmering clear, cold days can make the city feel more like a “half-fairy tale” than a “half-tourist trap,” the two categories into which “Death in Venice” author Thomas Mann lumped it a century ago.

While there’s significantly more elbow room in January, book ahead. Hotel reservations are a must year-round, with some cheaper pensions closed in winter (some of the open ones can have riscaldamento in name alone). If you want to attend a specific exhibit on a specific day, check up on reservations. Or risk spending most of the day waiting in line.

Bring wet-weather gear even if it weighs you down: raincoats, boots, umbrellas. While Venetian rains are best known for producing high water, aque alte, it’s drizzle and heavy fog that can hinder you in winter. Many Venetian stores sell cheap and lightweight gear, including boots, but most of the goods aren’t known for their staying power. Veteran Venetians wear high rubber boots.

A down coat and a scarf are helpful when traveling on the mass transit vaporetti. Crosswinds over land and water can make Venice into Chicago or Cardiff, only with fewer escapes to warm you up. Adriatic and northern storms can also snarl the city’s vital water traffic. If the vaporetti (little steam boats, literally) are slowed or forced to dock, Venice stalls.

But there’s a plus side to the problematic weather. Wandering through the labyrinth of narrow alleys on a foggy day can be a mystical adventure. Beware, though: it also means dealing with lots and lots of stairs. Smaller canals require crossing step bridges, which can hinder young parents with strollers, the elderly, and the disabled. Like much of Italy, Venice is not very handicap-accessible.

If you’re getting to a hotel via vaporetto — who isn’t? — remember you need to purchase a ticket for large suitcases. If you have heavy luggage, get a porter (portabagagli); they’re usually stationed at strategic points including the Piazzale Roma vaporetto stop at the train station and some Grand Canal stops. They’re expensive, yes, but worth it if you’re having trouble managing alone. Alternatively, travel light or stay close by, as we did (see Padua report below). Water taxis are prohibitively expensive and can make a gondola ride seem cheap.

If your friends demand to know whether Venice is still sinking — the mother of all Venice questions — tell them, “Yes, but …” The “but” is Moses, or Mose in Italian, a controversial €4.6 billion project to build a system of adjustable “smart” dikes around the city. The idea is that the 78 hydraulic barriers, underwater drawbridges, can be lifted to stem potentially damaging tides. Though the project is bitterly opposed by the current mayor, Massimo Cacciari, and by environmentalists who insist that further building will mar an already troubled ecosystem, it recently got a government backing by default, approved “for lack of alternatives,” said a statement. A fifth of the dikes are ready with the project scheduled for completion in 2011.

Will it really work? Check back in four years.

IF YOU SEEK A QUAINTER excursion, consider visiting the lagoon islands: Murano, Burano, and Torcello. That’s what I did with my husband Dan when my mother and her new husband came to visit last fall. Part of the charm of the islands is their distance from Venice’s center — Murano is 20 minutes away, Burano 40, depending on weather. The islands can give you a sense of Venetian mood minus the Rialto and San Marco hubbub.

Our first stop was Murano, Italy’s famed glass-blowing mecca. Once a modest fishing port and salt exporter, the island began thriving in 1291 when the bustling Venetian Republic ordered all glass foundries moved there to reduce the fire risk to Venice’s predominantly wooden structures.

In the 14th-century, Murano minted its own coins and boasted an affluent commercial aristocracy. Its artisans pioneered a variety of glass-engineering methods, including work in crystalline, enamel (smalto), gold-thread (aventurine), multicolor (millefiori), and milk glass (lattimo).

The island is lovely in spring and summer, but by the time we got there it was autumn galore. Steady rain, our loyal companion from Padua, turned into a full-scale downpour in Murano. First, we warmed-up over espresso and grappa in a café. We then sought one of the islands many glass showrooms. Most have ovens in their warehoused-sized back rooms. In summer, the ovens can make hot days hotter, but cooler days can turn flames to friends.

The resident maestro, a man of about 65, put on a show (most glass-blowing is public, so it is a show). Out came a long rod whose tip he plunged deep into the oven. When he removed it, a small ball of clear glass hung on the end. He held the rod to his lips and blew into it gently, forging light glass bubbles. Back into the oven it went, then more puffs, the spinning of the rod, and the addition of three mosaic “flowers” onto the glass. He then placed the molten concoction on a tabletop to elongate its form. This was followed by more rolling, another trip to the oven, the snapping off of glass edges, the use of elongated tweezers to widen the opening, one more trip to the oven, and ecco fatto — a fazzoletto vase (which did look like a handkerchief). He set it in another oven to slowly cool over 24 hours. It all took a theatrical 10 minutes.

Alas for us, the rain had our number.

We continued on to Burano, known for its lace. Burano, population 7,000, is a treat for the eyes in any weather. The facades of the houses are pink, yellow, blue, orange, even purple, a tribute to the array of color schemes in the lace-making trade that gave Burano its livelihood in much the same way as glass supported Murano.

The island’s main square is dedicated to Burano-born composer Baldassarre Galuppi (1706-85) who worked frequently with playwright Carlo Goldoni on comic opera (opera buffa) in Venetian dialect and even composed concertos for the cymbal. His travels — to London and St. Petersburg — made him the local luminary of his age.

Island residents speak in a chatty, consonant-heavy dialect known nowhere else in Italy. It has a sing-songy quality that some linguists trace back to Roman roots, when the island was settled by the fleeing residents of wealthy Altinum, sacked by Attila the Hun in the 5th-century.

When my mother bought souvenir lace, she noticed her purse was damp. Enough. We decided to forgo Torcello, the farthest removed of the islands, and return to Padua. Later, sipping hot tea and blow-drying our shoes, we agreed that it had been a rainy day well-spent.

Padua is about 30 minutes by rail or bus from the main Venice train station at Santa Lucia. Hotels can be pricey, but less than Venice, making Padua a good choice for forays into the lagoon city.

Only 25 people at a time are admitted into the recently-restored chapel, with reservations required. Visitors must get to the air conditioned waiting room outside the chapel at least five minutes before the time printed on their ticket. There’s a 15 minute multi-lingual presentation while the air in the waiting room is filtered to suit the interior microclimate. Visitors are then ushered inside for another 15 minutes.

Chapel rules are strict: Access doors open only once, on entrance and exit, which means you can’t be late. Tickets are non-refundable. Pets, bags, video cameras, cameras, food and drinks are barred. Mobile phones must be switched off.

A useful website with an English-language section is turismopadova.it

The chapel also has its own site: cappelladegliscrovegni.it