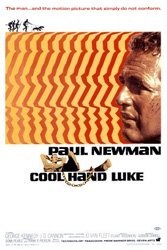 Hard to find a more pointedly effective movie about the limits of non-conformity than Stuart Rosenberg’s 1967 gem, made at the height of a decade of dissent. Paul Newman is Luke (Lucas Jackson, really), a handsome con who escapes his deep south chain gang every chance he gets — and is beaten to a pulp every time he’s caught. His hard-luck prisoner admirers, led by Dragline (a disturbing George Kennedy), elevate him to folk hero. They invest in his rebellion as their own.

Problem is that beneath the bravado Luke isn’t worth anyone’s money. He caves in. His mystique sullied, he’s doubly loathed by those he “betrayed.” Watching Luke’s transformation and Dragline’s response is worth 10 tickets. “Sometimes nothing can be a pretty cool hand,” says Luke, disappointing would-be underdogs. It’s his nothing, not his something, that’s cool. As for Newman, never ever better.