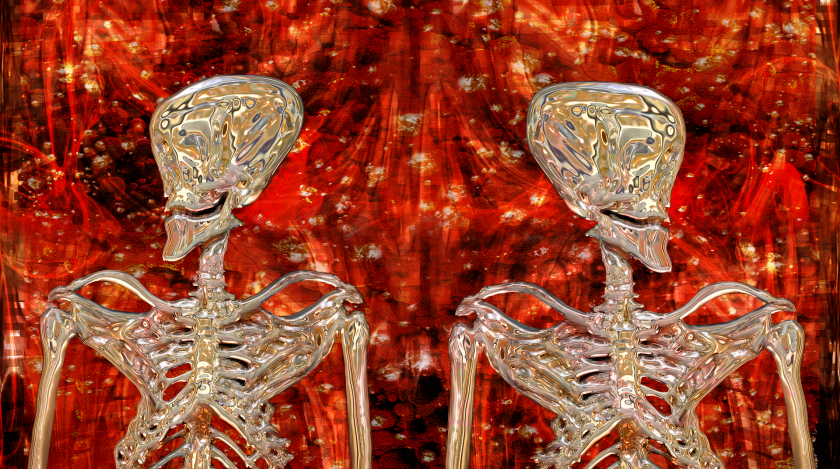 few weeks ago, a young friend of mine who had been feeling “not right” for the better part of a week decided to take a home COVID test, which came back positive. Melissa had been vaccinated in August, so the result surprised her. But aside from being surprised she was calm and composed, as if she’d caught a bad cold.

She had a low fever, muscle aches, the sniffles, and a very big wish to cuddle up in bed. Otherwise, since she’d already been working from home, she just kept up her daily routine, only this time in solitude. I brought Melissa food, offered to sit with her and keep her company, but she worried that she might re-infect me (I’ve already had the disease). She said she’d been getting so many calls and texts it had become annoying. “It’s as if I’m on death row,” she told me, laughing.

When I moved to “even-keeled America” I thought I was as far from paranoid Naples as a woman can get.

What she didn’t do was tune into the infinite web and TV chatter about the disease. Melissa intentionally blotted it all out, which I thought was smart of her. I did the same when I was sick six months ago, but my kids and husband talked to me the same way her friends talked to her: as if she’d been stricken with something sure to kill her.

I mention this because I’ve always been intrigued by hysteria. My mother, who was born just outside of Naples, needed only a nasty neighbor or a black cat to fly into a fury or a panic that scared all of us, if not to death then to tears. I vowed I would never be this way. When I moved to “even-keeled America” I thought I was as far from paranoid Naples as a woman can get. I was wrong. Naples is now making global rounds.

In recent years, I watched as talk shows got nastier and nastier, along with the tone of politics. Starting with the Bill Clinton sex scandal of the 1990s, talk and news took on a primal scream side, a black cat side, and after 9/11, the hysteria became official. In my American neighborhood — in the enlightened year of 2002 — two of my neighbors called the police because they suspected a terrorist was mowing a nearby lawn. He was Nassim, an Egyptian biologist-turned-handyman, thanks to the glory of the global economy. The police came, talked to him, and thankfully everyone ended up laughing. Except my neighbors, who still thought he should be detained. “Who knows if he’s just a garden guy,” said one of them. We never spoke again.

About a week after Melissa got COVID, another friend — a mother of two teens — also got it, probably because she’d been among the first people vaccinated, and vaccines get weaker after a year.

Unlike Melissa, she went — and this is one of my favorite American words — ballistic. This friend did a Naples on everyone. She forced her kids to get tested, her husband, and even a neighbor, which was funny because she actually went to the neighbor to tell him she was infected.

She basically lost her head and locked herself in her bedroom, sobbing. She called me (I’m like the neighborhood fire department) and sobbed through the door that she was feverish and sure to die, and that she’d probably “killed” her kids. In the background, the TV was on with headline news about, guess what…

She sobbed through the door that she was feverish and sure to die, and that she’d probably “killed” her kids.

Who needs a black cat or an angry neighbor, or even a Naples mother? We seem to have created a little Naples copycat for every possible emergency, and every iteration of COVID. The paranoid city I wanted so much to run away from is chasing me down after all.

Of course, a pandemic is a serious matter. No one argues that, or at least I don’t. But making COVID an excuse for jumping on the hysteria train makes me sick. Why? Because it makes everyone around you uneasy, and what happened in my Italian household certainly left its mark.

As a kid in Italy, I remember watching an American movie in which a character said, “Stay cool, calm, and collected.” The line made my year. These days, in my beloved America, I feel like I’m living though the hot, not the calm, never the collected, and ten minutes of CNN will always prove my point. It’s as if all their anchor-people were trained by my mother and pledged allegiance to black cats to get their jobs.

In the end, my married friend came out of her bedroom but insisted she’d live alone in the three-bedroom home for two weeks. This meant sending her kids to her sister’s home and exiling her husband to a motel. She kept calling me or WhatsApping me with links to stories about new variants and predictions of a slow but sure global wipeout. I stopped writing her when a message I sent with my three favorite “C-words” — cool, calm, collected — was met with ARE U CRAZY!!!!

I stopped counting the exclamation points at ten, my Naples limit, and checked on Melissa, who when I asked her how she was doing replied. “Fine, fine, I’m not worried.”