Cooking with the stars 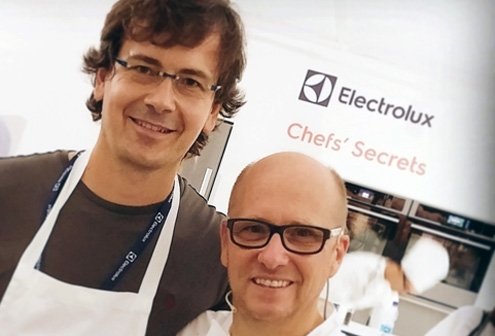 few months ago I paid €15 to attend a daylong wine and cooking seminar called “Taste of Roma 2015” held in the city’s Renzo Piano-designed Auditorium. You cook along with star chefs who demonstrate their favorite dishes in an event focused on creating and executing recipes. Into its fourth year, Taste of Roma was advertised on the back of a city bus, for once making me grateful for traffic jams.

First up was Inopia chef Andrea Dolciotti and his cuttlefish sous-vide. Sous-vide cooking requires sealing food in airtight plastic bags and soaking it at length in hot water or in a steam bath. The vacuum helps maintain moisture. Smaller versions of kitchen appliances are now available for home use, suddenly making sous-vide more appealing (Swedish appliance firm Electrolux was the chief sponsor of the event).

Docliotti took fresh cuttlefish, cleaned it, and then stuck it into a blender, creating a smooth, thick paste. He put the paste into a plastic bag, ensuring it was vacuum packed (the sous-vide process) and flattening it into roughly the shape of a leaf. He then placed the sealed bag into its hot water bath and cooked it. Dolciotti’s recipe teased out the strong maritime aroma of the cuttlefish.

Browsing the presentations, I was struck how once-exotic ingredients such as ginger, Japanese algae, and soy sprouts are now commonplace. The world is a big fish tank.

By chance, I got a front-row seat at Michelin chef Heinz Beck’s presentation of his famous tomato risotto and tuna tartar platter. Participants got their own stovetop and followed along. At one point I asked Beck, executive chef at La Pergola, how he’d come up with the dish. Simple, he explained: He’d gotten the ingredients wrong and then mixed up the pots. The joke took a while to settle in.

Chance, of course, had nothing to do with it. The tomato and tuna recipe came from the blender. Beck noticed the liquid forming underneath blended tomato pulp, which he (and other cooks) usually tossed. He decided to drain the liquid and use it as a potential flavor enhancer. It worked.

He tasted each of our risottos, suggesting how to strike a better balance between the liquid and chicken broth. I suddenly felt like a reality show contestant.

When I finally compared my version to his — mine seemed soft — I understood why Beck is Beck. His risotto burst with tomato flavor without drowning out the tuna.

Next came a presentation by Italian-born, American-trained chef Cristina Bowerman. Bowerman runs the kitchen at Glass, a Trastevere restaurant known for nonconformist cooking in what’s probably Rome’s most traditional neighborhood.

Dynamic and extroverted, Bowerman presented her own version of risotto, made with shrimp assorted grains, and seasoned with herbs. The key part is paying attention to cooking time of the grains. I apparently improved on my Beck performance, with Bowerman nodding in approval (though my broth seemed bland to me).

Finally came Simone Ciccotti of Ristorante Antica Trattoria San Lorenzo with his confit of rabbit and tuna on the fly (tonno di coniglio volante in confit), which he created to help persuade his son to eat rabbit. It might be on the fly (volante) for Ciccotti, but I’m not a master chef.

First he de-boned the rabbit and stuffed its insides with tuna. He then covered the rabbit in plastic wrap and boiled it in water for 10 minutes (using plastic wrap can be dicey but it’s convenient). After the bath, the tuna-stuffed rabbit roll was placed in a saucepan and cooked for 10 minutes. Not so much on the fly but delicious.

Strangely enough these remarkable dishes made me think of Fettucine Alfredo. The “magic” fettucine known the world over is basically pasta and Parmesan with a ton of butter. Legend has it that Rome restaurant owner Alfredo Di Lelio made it as a tonic for his wife after she’d given birth to the couple’s first son. The dish soon had a celebrity following, and so did Alfredo.

Here I was studying amazing concoctions but the one recipe that’s acquired enduring global fame is pasta, cheese, and butter.

— In a deep pan, fry the onion and bacon in the extra-virgin olive oil. Deglaze the pan with the white wine.

— Treat the grains (listed above) like rice and add them to the mix. Be especially careful to respect their different cooking times.

— Slowly add the shellfish bisque and even out the flavor with the fish sauce.

— When all the grains are cooked, amass them, adding a tablespoon of crème fraîche. Then add the shrimp, the crab, the oyster leaves and herbs.

A fragrant and fruity Valdobbiadene prosecco is an excellent companion to Bowerman’s delight.