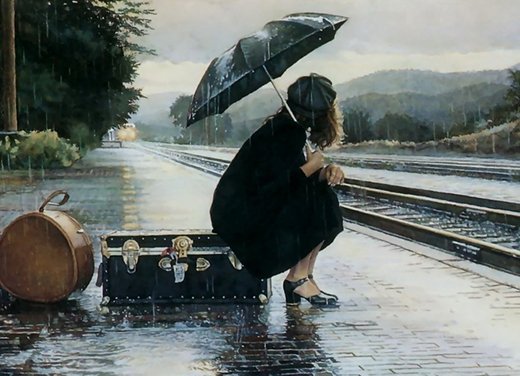 In any movie, count on her being miserable. But maybe she's thrilled to be leaving....
T

hanksgiving rolled around a month or so ago — it must be like a wheel since it seems to roll around every year. In any event, all this circular motion made me realize I hadn’t spent it with my family. Again.

Not only that, all the members of my family were all at lest 3,000 miles from my tiny village of Los Angeles. In the lead-up to the holiday, everyone around me asked about my plans. What I was going to eat, and with whom. Humans seem to have built-in software that is programmed to ask these questions on cue, the way your phone automatically adjusts for Daylight Savings Time.

After repeating my non-plans several times, an answering machine pattern began to emerge. At the beep, I’d concisely state that I’d be spending the day alone. The response was invariably a pitiful look, as if my honest answer masked torrents of deep emotion.

This got me thinking about solitude. I’ve never particularly minded being alone on holidays. That said, all the sad looks had a Thanksgiving-like rolling effect. I began asking myself if I should feel alone.

Are they right that holidays have a higher collective calling I just can’t hear?

I’ve never seen Thanksgiving as much more than a promise of a good dinner.

My responses about how I planned to spend Thanksgiving seemed deserving of all these mopey, poor-you eyes. I’m a sucker for self-doubt: give me an opening and I’ll think twice. Maybe they were right to feel sorry for me. Maybe I was trifling with a special day, hurting its feelings. Maybe Thanksgiving was moping.

If so, it’s about to mope more, since I’ve never seen it as much more than a promise of a good dinner. Maybe Thanksgiving zeal varied by the year, leap year style, and this edition demanded vigorous celebration. Happy Thanksgiving wishes admittedly poured in from family and friends. It was as if people were impatient for Christmas to arrive and had decided to rally around Thanksgiving. Or maybe it was Thanksgiving’s coming-of-age birthday and I’d missed that memo.

I brought this up to a classmate of mine who told me the holiday has always been an American rallying cry. I probably missed this growing up in Italy, which doesn’t know much about Miles Standish and Pocahontas. Still, I wondered why it had taken me so long to discover the Thanksgiving pull.

Had I just tuned out the past or did my sense of everyone’s heightened Thanksgiving agitation mean I was really missing my family more this year?

I don’t want to sound cynical or anti-sentimental, ruining the “secret craving for family and companionship” theory, but I really didn’t (and don’t) mind flying solo. I guess I just wasn’t made to belong to greeting card slogans.

Which leads me to the far bigger question: what makes us feel alone?

There’s no universal state of alone-ness. Put another way, I don’t think a certain set of objective circumstances make humans feel alone. Aloneness is an entirely subjective feeling. It’s not “cured” by being with other people.

The walk was refreshing, dramatic, and above all very familiar, since I grew up in rainy Milan. What makes me feel alone? Let’s start with a group outing to the beach in summer. I feel isolated.

For others, beach hangouts are a social apex that rank high on a year’s list of highlights.

Again, what is aloneness? Is it something intangible, triggered by being left out of a group or not enjoying collective experiences? So-called millennials (I carry my millennial photo ID everywhere) are burdened by a winter phenomenon called “cuffing season,” by which the members of our tribe mean that winter is coming. You must couple-up or else risk being stricken by the dreaded cold, which you’ll have to suffer alone (and, because you’re alone, you’re too despondent to engage in any form of social interaction). By “cuffing season” logic, not coupling up exposes you to isolation while all your friends busy themselves doing things with their antifreeze-equipped partners.

Millennial culture further suggests that unless you also possess what your friends possess, in this case a partner (though it can easily apply to material things) you are inherently doomed to aloneness.

During the winter you must couple-up or else risk being stricken by the dreaded cold.

But how then to account for people like me (and I’m not alone) who feel perfectly content without antifreeze and snow tires? What about people who are actually relieved by their uncoupled status? Or who don’t have the slightest need to treat winter as a disease that needs common curing?

This leads me back to the same question about the nature of aloneness, one that may not have an answer.

I’ve come to believe aloneness is entirely circumstantial. I know being without my family at Christmas would leave me empty inside. At the same time I also know that if I found myself off filming somewhere, that sense of aloneness would be offset, at least in part.

So, even deep within, there is no standard of absolute aloneness. That can be a double-edged sword, however. On the one hand it means we can never fully defend against situations that might make us feel isolated. They’re just too variable. On the other, it also means that there are no preset circumstances in which we’re destined to feel alone, regardless of our efforts.

Once we learn how aloneness works for us and the situations that cause it, we can begin to craft a personal set of defense systems.

Memory also plays a role, which may be why happily sipping a hot drink and going (uncoupled) to a movie — something we did often on rainy days in Milan — allowed me to enjoy Thanksgiving in what I just might call family style.