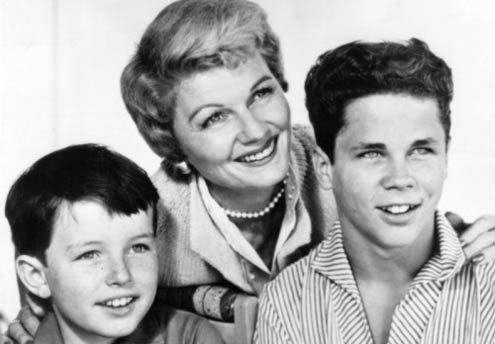 The June Cleaver model of 1950s American motherhood concealed strong women who refused to give up their identities.
I

t’s been a busy week in Milan, including old boyfriends, domestic intrigue, and sick children. But the biggest hit to my well-ordered life was a bomb dropped by a friend, with whom I brought up children and shared a ski-house in Cortina for close to two decades.

Over lunch she revealed that she was having an affair with a high school crush and her husband had moved out. Not only that. She announced that 20 years of daily life, vacations and dinner parties had been a sham.

I was unsettled and even felt a bit betrayed. Who knew — since she never told me or anyone else including her doting husband — that two decades of motherhood and dedication to the wifely trappings of bourgeois living had weighed so heavily?

But what really got under my skin was one comment in particular. “I gave my life to my children,” she told me, “and now it’s time for me to have a bit of life.”

Really? My unspoken reply was, “Who asked you to give up your life?”

Back in our house-sharing days, her son played with Lego under the table during the adult dinner hour. My own children were bundled off with a bath and story by eight p.m. She considered me heartless. “I am so in love with my son I don’t ever want to be separated from him,” she would tell me.

Call it heartless but I wanted to enjoy a hard-earned aperitivo in a Lego and tantrum-free adult world. For a few hours a day, I needed to take back my life.

It would be easy to dismiss my friend as an example of self-sacrificing Italian motherhood. But I suspect the situation is worse in the United States, where the phrase “helicopter parent” was coined.

Lately I have been following Pinterest, a popular content sharing site. I’ve been amazed by elaborate children’s rooms and highly articulated birthday party themes posted by parents. They speak of an invasive obsession with children’s lives that seem more concerned with inter-mother competition than delighting children. Likewise, the heavy-handed homemaking epitomized by Martha Stewart goes beyond anything I ever saw during the Golden Age of the stay-at-home mom.

My 1960s mother never had a job outside the home, except teaching nursery school during the war (with the Dr. Benjamin Spock!). The gifts that would have made her a great architect went no further than re-arranging furniture and mentally renovating rented vacation homes. Our family was my mother’s first priority, but it was one of many.

Mom read, played tennis, gardened, and was a tireless volunteer. We had good meals and a lovely home. Her wonderful friends played practical jokes on each other. They organized parties and treasure hunts for us. The focus was not on making a fancier cupcake but on the fun children and adults all had — each in their own way.

My mother’s busy life didn’t make me feel abandoned or resentful. Instead, I basked like a parasite in the respect and friendship she earned as she cared for my father after his stroke or kept score for the summer’s annual softball games at the lake. Whenever she was out for choir practice or garden club, I loved the freedom of opening a can of soup for lunch and reading while I ate. My parents’ frequent travels were also “vacations” for us, when babysitters brought TVs to our television-free home.

When my parents had dinner parties, I was allowed to participate, insofar as it meant setting the table with the best china, silver cigarette lighters and Royal Worcester cigarette dishes. But then it was “hello” to the guests, who smelled of gin, whisky and smoke, and off to bed. Clinking glasses and distant voices lulled me to sleep.

My parents’ and my worlds were separate but connected. Space where adults could be adults made it safe to be a child. The worlds would eventually join, I knew, but only when everyone was ready.

My mother was not an easy woman. Her comments could cut like scalpels. Her understatements were stealth bombs (“I’m just a bit disappointed.”). They left scars.

Mom’s independence was not selfish. She could and did sacrifice comfort for the sake of her children. When my father suffered a stroke, I offered to leave college to help for a while. Mom gave me a rare hug and said, “That’s very nice dear, but you can do more by getting on with your own life.” Later, at 80, she allowed herself the occasional lunch of potato chips and Coke. She could because she didn’t “have to be an example anymore.” (I was 42.)

But what my mother gave up were things, they were not her self.

Still, what strikes me while writing about her is that she’s more vivid to me as a person than as a maternal figure. Yes, she was a serious and conscientious mother. But being a mother was part of her life’s broader context, not its goal.

Lately, debates about what kind of mother is best fill the press. Tiger Mom, French Mom, and so on, are all abstract schemes and models based on cultural norms rather than personal values. What we need is Compass Mom. Compass Mom provides a fixed point in changing conditions and twisting paths. The fixed point is her personal integrity and honest loyalty to her individuality.

Compass Mom may give up the lunchtime Coke, but not her life.

Children are a gift, but they are not our property. Khalil Gibran told parents: “You are the bows from which your children as living arrows are sent forth.” Best not to concentrate too much on the arrows at the risk of forgetting the archery skills.