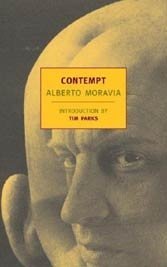 By Alberto Moravia, translated from the Italian by Angus Davisdon

oravia’s marital autopsy is a kernel of contained savagery that examines what happens to a man when a wife’s love not only mysteriously vanishes but also inexplicably becomes quiet but fierce loathing. The Italian title, disprezzo hisses more loudly than its English counterpart, “contempt,” because Moravia and his biased narrator exists well outside Graham Greene’s redemptive territory. The novel’s people are ancient, visceral, and feral, with passionate Mediterranean contours that modern intellect (read Freud) is powerless to repair.

In Rome of the late 1940s, aspiring playwright and profoundly self-involved intellectual Riccardo Molteni lives with his less educated, former typist wife Emilia. Both are in their late 20s. The hard-up Molteni writes scripts for a living, mostly for Battisti, a pretentious producer Molteni sees as raping his intelligence. Apparently sensitive to his wife’s needs, Molteni moves the couple from a room to a small apartment. But her behavior changes. She turns cool, then cold. The despairing, deeply self-involved Molteni, worried she no longer loves him and what that says about him, forces her hand until she snaps: “I despise you and you disgust me every time you touch me. There’s the truth for you…”

Molteni’s obsessive question is why, which is where Moravia sets sail into shark-infested psychology. Molteni tries persuading his wife she’s wrong — “a cripple trying to demonstrate a dance step.”; he also tries shifting life to Capri, where Battisti wants him to collaborate with German director Rheingold on a film version of “The Odyssey.” But Capri just makes matters worse. Rheingold’s Freudian vision of the fractured relationship between Odysseus and his wife Penelope only deepens the abyss between Molteni and Emilia.

The solution is no solution, instead a self-fulfilling aggregation of a puzzle’s cruel pieces, the process informed by Moravia’s ruthless and unsentimental human intelligence.

“A man who is despised,” concludes Molteni, “can nor ought to find peace as long as the contempt endures.” Though the distraught Molteni comes to see himself as a civilized man in a primitive situation, it is just such primitivism that informs the real world.