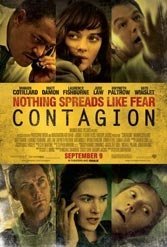 The early 1990s saw a slew of nonfiction about contagious diseases, including “The Hot Zone” and “The Coming Plague,” the first a riveting biography of the Ebola virus, the second an ominous warning about the growth of rampant viral strains. Both transmitted a lethal urgency that Swine Flu and Avian Flu hinted at but thankfully never delivered on. Judging from this nasty little sneeze of a movie, director Steven Soderbergh was paying attention, except that it took him 20 years (plus 9/11) to come up with a palatable Hollywood thriller.

The first-rate early narrative focuses on the detective work necessary to find what Beth contracted and where (blame bats and pigs), located Patient 0, and determine how the virus spreads, using Beth’s movements as clues. Soderbergh has a knack for portraying confusion and mass panic, particularly when no vaccine is immediately available and the only defense is “social distancing,” eventually enforced by the military. He hits every available hot-button topic — blog “truth,” official coverups, Wall Street complicity, family favoritism, adultery, and the grotesque extremes of bureaucratic mundanity (“To report a death or to request the removal of a body, press 1.”). He also points an Ichabod Crane finger at China, whose public hygiene standards have been repeatedly criticized by the World Health Organization. All this is filtered delivered courtesy of throbbing soundtrack that gives worry a pulse.

The story withers and dies when all that’s left is the dissemination of the vaccine, forcing Soderbergh to quickly tie up his (too) many subplots. It’s an unsatisfactory denouement to a movie whose premise is “the plague will be televised.” Consider this a prequel for “28 Days Later,” a far more sinister Danny Boyle concoction.