Constantine’s Sword: The Church and the Jews 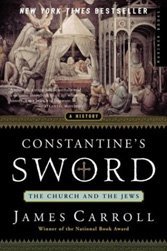 Novelist and former Catholic priest (but not, significantly, former-Catholic) James Carroll begins his search for understand of the Shoah by asking, Why is there a twenty-foot wooden cross in the Auschwitz death camp? The answer takes us back to the days of Jesus, the author’s own childhood in Virginia, and the nearly two-thousand years of European history in between. Carroll presents a lengthy critique of “supersessionism,” the long-held (and officially disavowed) belief that the Church usurped the chosenness of the Jewish people, and what he calls the “Christianization of the Holocaust.” The great power shift took place after Constantine, the first Roman emperor to embrace Christianity, won a decisive battle at the Milvian Bridge against Maxentius (the year was 312 C.E.) Legend — or tradition — says that the embattled Constantine looked up and saw a vision of the cross in the sky, embraced both the vision and the cross, and within a year of his victory had the entirety of the Western empire in the palm of his hand. Whether Constantine ever became a believing Christian is anyone’s guess, but he prophetically deduced the rallying power of the cross and married it to military might. This shift changed the course of Western history and spelled disaster for the Jews.

Carroll’s book takes a long look at each major step in the rise of the Church, from a tiny prayer group centered around the disciples and friends of Jesus to the Nicene Creed (which “put the crucifixion at the heart of faith and the death of Jesus at the heart of redemption”), Constantine’s mother Helena and the cult of holy relics, the rise of anti-Jewish preachers like John Chrysostom, the “golden-mouthed,” and culminating in the institutionalization of anti-Judaism. At each historical pivot Carroll suggests an alternative path, a way out which, had it been taken, might have led us down a different road.

The last part of the book is Carroll’s call for a Vatican III, when “the Church must therefore preach the anti-Jewish texts of the Gospels — not against the Jews, but against itself.” For Carroll Vatican II was a step in the right direction, but until the Church is able to confront its own history — including its own founding scriptures — self-critically, it will remain essentially a pawn of its own historical power.