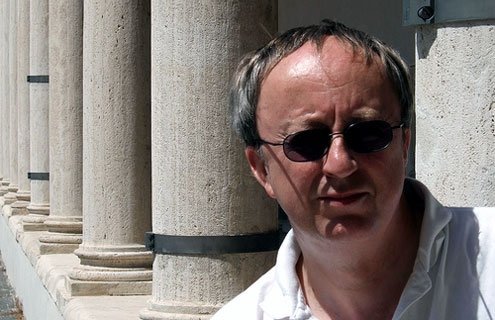 n a Roman summer midnight, 60-year-old Englishman Malise Gabriel exits a balcony door toward the cooling dark. With such ordinary act, David Hewson jump-starts “The Fallen Angel”; it carries his trademark as fast, tightly plotted thriller. This time focused on the Machiavellian-like conspiracies that highlight Italy’s past and present.

In our third mil, when renowned Galileo expert Gabriel steps onto his apartment’s restoration scaffold, a loud crack rackets through ancient streets. One academic and sabotaged planking plummet five floors to the city’s black cobblestones. Like his hero Galileo, Gabriel’s visit to the Eternal City has turned deadly.

By deft coincidence, in Hewson’s latest and ninth Italian detective story starring Questura sovrintendente Nic Costa, the cop is enjoying an August vacation, until a late stroll through the storied Ghetto area makes him first witness to a not-so-accidental death.

A grim account of history, mysteries, and conspiracies in the Eternal City whirls the reader from present to past. Today mirroring yesterday. Proving that Italians have ever relished a well-contrived web of intrigue… fiction or not.

Hewson is spot-on as he uses the Malise English family to reveal Italy’s deeply embedded admiration of the successful deceiver. Here, close-knit inner circles — whether groups of relatives, government cliques, religious or academic institutions-have all plotted over centuries: to their own increased benefit. But in this Questura case, who gains by Gabriel’s death?

He’s been working as editor for The Brotherhood of Owls, a Catholic institution formed in Galileo’s day to defend him from Vatican persecution. Though the foundation has never accepted Galileo’s theses. So why hire Gabriel, who fiercely champions the scientist? In conflict with his bosses, he begins to identify with his idol. Was this Englishman murdered for his philosophy?

Off-duty Nic is sure that at least one actor in this drama is innocent. He “knows” Gabriel’s 17-year-old daughter could never be implicated in her beloved father’s death.

For as Nic approaches the old man’s sprawled and broken body, he also encounters that lovely girl, her long blond hair flying as she races from the palazzo doorway. To weep over Gabriel’s corpse. As Nic forcibly carries her from her father’s body to safe distance, she immediately begins calling out “Robert.” A tall boy has appeared in the building’s vast doorway. He’s waving a gun. “Now she’s safe,” he shouts, then disappears into a tangled warren of back alleys.

Having saved Mina Gabriel from a rubble — raining death scene, and possibly even from brother Robert, Nic’s hooked by her sobs. With her innocent, guileless, and silently pleading gaze, it’s clear she wants to tell him something. What did her brother say? “Now she’s safe.” A tormented, young blond woman bemoaning her dead father, on Via Beatrice Cenci? Four centuries ago wasn’t blond Beatrice tortured and decapitated for her supposed role in a family conspiracy to kill the father who sexually abused her? Isn’t the Cenci’s own family palace just across the street?

Later crime scene visit reveals Mina’s bedroom poster of Beatrice as painted by Renaissance artist Guido Reni. To Nic’s shock, Mina resembles her. The girl insists she’s only studied this tragic life with the idea of guiding tours around the sites that mark Beatrice’s imprisonment, trial and beheading. She “understands” Beatrice. And now these two girls, separated by four centuries, are finally linked: by their undefined roles in a father’s murder. Both have claimed total innocence, supported by their families. In Mina’s case, relatives offer eerily shifting versions of the events leading up to Gabriel’s death.

In a nanosecond the media notice these Beatrice/Mina parallels. Digital superimpositions of Mina’s face over the Reni portrait of Beatrice stare from online and print news. They’re splashy covers on gossip mags.

Mina’s a celeb, afraid to be recognized alone in public. What can a young off-duty cop do for a mourning innocent, if not take her on a whizzing scooter ride round all the locations highlighted in her planned Beatrice tour. This gives Hewson — and his reader — a chance to sweep around the fascinating Eternal City, along with Nic and Mina. While morgue and forensics squads do the grit work.

Fortunately. For as in all fine detective fiction, truth here arrives through the accumulation of evidence. Hard facts unveil myriad lies. And select which mosaic pieces will resolve Gabriel’s puzzling murder.

A page-turner, very Roman tale, whose finale offers a surprise twist, for both sovrintendente and reader.