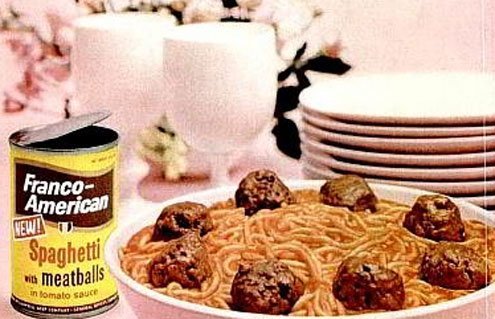 Spaghetti and meatballs? A U.S. special.
A

few weeks ago I was walking along a side street near Piazza Navona with a couple from New York when the husband asked me where he could find the best Caesar salad in Rome.

I smiled and stifled a laugh. Among the few places where you can actually find a Caesar salad is an American restaurant. Surprised, and somewhat disappointed, the husband asked me about the origin of the famous salad. That one I couldn’t answer — at least not immediately. Instead, I decided to shed light on the background of a few dishes (or tendencies) that while common to Italo-American restaurants are not entirely Italian.

Dipping One of the first things many American visitors ask for when they get a basket of bread is a bottle of olive oil for dipping. I have yet to see an Italian do this. Bread is for la scarpetta (“the little shoe”); which means dipping in to sop up the remaining sauce. It’s something you see even at the most elegant restaurant.

Garlic bread My best guess is that American garlic bread is a variation on plain bruschetta, but with more kick. The simplest bruschetta is a slice of bread rubbed with a garlic clove (to absorb a touch of the flavor) and drizzled with olive oil. A slight hint of garlic flavor suffices for most Italians. Diced garlic slathered over bread has little appeal.

In the early 20th century, Italians immigrants to the United States brought many traditional cooking methods. Some of them were true to the home version, others were not.

Meatballs In Sicily and all across the south, meatballs are baked by themselves and served as either an antipasto or a secondo. I once had a Sicilian roommate who would bring home container after container and deposit them in the freezer for year-round use, his eyes lighting up each time he reheated a few of the tasty morsels.

As you work your way north (first Naples and then Rome), you begin to see meatballs covered in tomato sauce. The outside is browned and tossed in a shallow pan with a smothering of tomato sauce to keep them moist in the oven.

But nowhere along the peninsula are they eaten over pasta. The first record of the combination comes instead from Italian immigrants in New York.

The closest Italian version is a Bolognese sauce, a thick tomato sauce with ground meat served with fettuccine or any kind of flat, long pasta, such as tagliatelle. Meatballs are not served with spaghetti because their shape is inappropriate to the long strands of pasta.

While there are no hard and fast rules regarding the pairing pasta with sauce, there are guidelines. For example, long thin pastas go with slightly chunky sauces; as you twirl a fork of tagliatelle, a Bolognese sauce sticks to it well.

Short pastas work with ingredients cut into pieces. Tube-shaped paccheri are great with small cubes of tuna because you can stick each with your fork. Liquid sauces are best with ribbed pasta. Penne rigate hold spicy arrabbiata tomato sauce in their ridges.

Alfredo The next dish returns us to Rome. At a small restaurant on Via della Scrofa in 1914, the owners wife was pregnant and having trouble keeping down her food. Restaurateur Alfredo di Leilo put more butter into the traditional fettuccine al burro to make it smoother and more palatable.

That new, creamier pasta yielded a famous dish. The ingredients are basic: pasta, butter and Parmesan cheese. Adding an extra dollop of butter and slowly melting the cheese on top of the pasta (already in a pan) emulsifies it faster.

He named the dish after himself, fettuccine Alfredo. Early American movie stars and starlets visiting Rome were so delighted by the dish they brought it back to Hollywood and made it a symbol of Italian cooking.

Ask an Italian outside the Roman restaurant scene the meaning of fettuccine Alfredo and few are likely to know. Instead, they’re familiar with Fettucine al burro.

Back to the Caesar salad. After a little research I found out it originated in Tijuana, of all places. An Italian-born Mexican by the name of Caesar Cardini, who lived in San Diego, opened a south-of-the-border restaurant in 1924 in an effort to dodge prohibition. According to legend, a July 4 rush left the kitchen short on supplies. He made a salad from what was left.

Those ingredients included raw egg, Worcestershire sauce, lemon juice, olive oil and black pepper. As an added touch, decked out in chef’s clothing, he tossed the salad in front of his guests, whipping the dressing and combining it with Romaine lettuce, croutons and Parmesan cheese. It was Caesar Cardini’s salad.