Consider the Lobster: And Other Essays 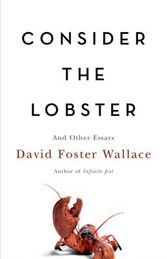 Maybe you passed on David Foster Wallace’s rambling meta-opus “Infinite Jest” because you like your page counts without commas. (It weighed in at a taut 1,088 pages.) Perhaps it was the looming hiatal hernia dare you transport it to the cassa. Whatever the reason, fear no more. The outsized, untethered genius of DFW — hailed by the Boston Globe as “probably the most important novelist of his generation” — has been reined in and repackaged thanks to the staple gun.

So your hamstrings may be safe, but your synapses best be girded. As one hopes was foodie doyenne Ruth Reichl, editor of Gourmet, when the winsome travelogue she commissioned from DFW on the Maine Lobster Fest came juddering over the transom with the following central conceit: ”Is it all right to boil a sentient creature alive just for our gustatory pleasure?”

About the Author: Christopher Daniels