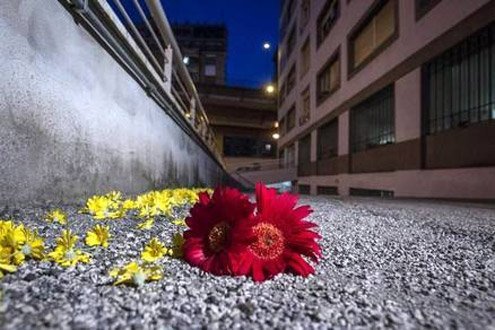 Flowers on the spot where Simone D. leapt to his death.
T

he suicide of a 21-year old gay man who jumped from the 11th-floor of a Rome building makes for sad hearing. According to reports, the man, publicly known only as Simone D., left behind a note stating, “Italy is a free country, but it has homophobes. Those who think that way need to reckon with their own conscience.”

It was the third such case over the last year alone. In November 2012, a 15-year-old student committed suicide after being bullied constantly at school because of his sexual choices. In August 2013, a 14-year-old jumped off a building for similar reasons.

These incidents, in a 21st-century that so far has taken pride in its openness and sense of tolerance, should set alarm bells ringing. Young lives are being destroyed.

Though Italy recently passed a law to punish those who incite homophobic hatred, bullies are hard to isolate, let alone incriminate. Few speak out against them, with victims often reluctant to come forward for fear of being rebuked or judged. It’s an old story.

Italy is also a Catholic state, and as such still struggles to come to terms with gay rights. At the same time, ironically, Christianity hinges on the unconditional acceptance of one’s neighbor, with judgment set aside. In July, Pope Francis was widely quoted for his groundbreaking reply to a question about his views on gay marriage. “Who am I to judge a gay person of goodwill who seeks the Lord? You can’t marginalize these people.”

With the Church beginning to take the right steps, the Italian state should follow suit.

Earlier this year, blogger and gay rights advocate Marcello Signore wrote a piece for the Huffington Post entitled “It’s Time for a Gay Revolution in Italy.” He said Italy needed a true, brave and forward-thinking LGBT leader, a “Han Solo” figure who would accept being in the forefront of the campaign for gay equality in all arenas. At the moment, he lamented, Italy’s gay representation was limited to “B-level personalities whose full-time job is going on the Italian version of ‘The View’ or ‘Judge Judy’ or doing some ‘Dancing With the Stars.’ They’re old and bald and preach like pastors. They guide flocks of sheep ‘Brokeback Mountain’-style. They have no relevant ideas, they are not brave, and they don’t think forward.” He proposed himself.

But Italy is a tough nut to crack, starting with its politicians. Former Prime Minister Silvio Berlusconi once fended off accusations of sexual impropriety by quipping that it was “better to like beautiful girls than to be gay.” Thankfully, recent convictions have put him out of the running for government office. The next step is finding a more open-minded political generation.

From time to time, however, Italians have shown that they can look beyond a person’s sexual preferences. In November 2012, Sicilians elected an openly gay man, Rosario Crocetta, as the president of the region, a remarkable decision since Sicily has long been seen as a bastion of Catholic, conservative thinking. An anti-mafia campaigner who according to police has been repeatedly targeting for assassination, Crocetta was elected on merit and because of his determination to take on organized crime.

After the election, the 62-year-old Crocetta — a devout Catholic who has had a predictably stormy relationship with the Church — insisted people most appreciated politicians who were open and honest with them. Those human values, and not sexual preferences, he said, were the difference-makers.

At a national level, longtime LGBT activist Nicola “Nichi” Vendola, president of the Puglia region, finished a strong third in a recent run for the leadership of the Italian Democratic Party.

Despite these small steps, activists underscore the extent to which Italy still lags behind other European countries in terms of gay rights.

Last year, Italy was ranked near the bottom of an International Gay and Lesbian Association (ILGA) survey that assessed gay rights in the 27 European Union states. Italy is among only four other EU members — outside former Soviet Bloc states — that offers no legal recognition of either same-sex marriage or civil unions between gay couples. Amnesty International has deplored Italy’s failure to act on gender discrimination, calling its approach “unacceptable.”

Attitudes are hard to change, and it Italy will need time to catch up. Yet young men killing themselves because feel ostracized and inferior — or are repeatedly bullied — is intolerable. The suicides should serve as a wakeup call to everyone that hatred can literally destroy a life. A democracy, in order to call itself that, must accept differences and urge people to make an effort to live together in harmony. Otherwise it’s a democracy in name only. The same holds true for faith. As Sicily’s Crosetta remarked in September: “I don’t think you can get close to the sacred by denying the human being.”