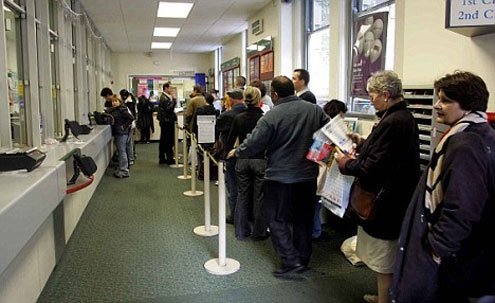 Italy: A cultural fundamentally defined by waiting.
I

n 1977, the chief Reuters correspondent in Rome wrote a charming guest piece for the International Herald Tribune about his day-to-day life in Rome, capital of nonsense. He began with politics but ended with clocks. He rightly observed that the city’s street clocks, if they worked at all, all told different time. Some tell the same time, 34 years later.

One-upping the perfect metaphor is impossible. That’s not to say absurdity hasn’t made headway.

Consider the simple task — I begin with an oxymoron — of changing the payment method on a bill. For decades, most Italians paid their utilities bills at post offices, getting sulking uncles or sullen hired help to hand over wads of cash to disinterested state employees. Many still do.

But beginning in the late 1990s, some companies gradually got a whiff of a brave new world and began offering direct deposit options, including bank debit and credit card payments. Later, a few even began acknowledging the e-world, but only in snippets.

I recently acted on a offer promoted by my web and phone provider to pay by credit card. “Be free at last,” said the offer. “Pay contentedly from the privacy of your own home at no extra charge. It’s simple!”

The simplicity that led to contentedness involved filling out a by-rote online form, with gender, address, date of birth, and credit card number.

It’s a rite I’d memorized in the United States, at times admittedly stuck on hold with customer service when my card number and Italian zip code offended xenophobic software. Most of these problems were resolved swiftly, or not at all.

Italy, alas, prefers the torment of the in-between, a grinning place that puts panting ahead of orgasm (much the way it prefers the surreptitiousness of leaked wiretaps to the tediousness of evidentiary prosecution).

My “Be free at last” effort went ahead largely incident-free. My credit card was acknowledged and accepted with little resistance. After completing each online page I warily pressed enter and found myself astonishingly rewarded with approvals.

There were seven pages in all, the penultimate one telling in with American verve that I was mere moments away from “total satisfaction.” This pleased me almost unduly, perhaps because Italy rarely rewards you for anything, and let alone say thank you.

I reckoned it was time to admit the existence of an “alt-Italy,” a part-time reality in which some clocks worked. This was the Italy trying to make good on the efficiency-driven dicta of the European Union, a largely Franco-German concern that prizes words such as “accession” and “harmony” but still finds itself funding laggards.

Finally came the triumphal last page. Here, I was asked to enter a secret alpha-numeric code containing seven numbers and four letters. Why anyone needed an 11-strong string eluded me, but new is new, and ostensibly good.

I entered three different passwords before my company’s “elaborator” (Italy’s pre-Apple name for computers) found one it agreed with.

“The operation has been completed with success!” came a message, along with a screen that summarized my digital basics. It invited me to print it out.

I sighed with glad relief. No more post office lines. Adhering to the spirit of harmonization, my credit card would now included debt-ridden euros along with debt-ridden dollars.

I now waited for the confirming email, which arrived with extreme promptness. This is what it said:

“Congratulations! You have been approved to pay your bill through the use of your credit card. To fully complete and register this request, please print and fully fill out the form provided below and send it through registered mail from your local post office to the address indicated. We will subsequently inform you when your request has been processed and whether it has been approved. Thank you for using our fully automated system. We are dedicated to your satisfaction.”