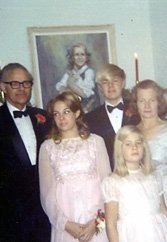 Clockwise from left, Hugh Johnson, Daniel, Tottie, Madeleine and Cynthia, circa 1968.
I

was disoriented this fall. Even with Halloween just around the corner, there was still no nip in the air to urge on certain autumn rites. When arriving cold sharpens time’s passing, small rituals can work their reassuring magic. In Italy, the rites consist of wearing stockings for the first time or doing my closet’s cambio di stagione.

The rites of a Midwestern childhood were more complex and drawn out; their reassuring magic more potent. They began with Thanksgiving at my cousins’ and shopping at Marshall Field’s in Chicago.

Still elegant, the store’s buildings covered several city blocks. Moving among them meant traversing frigid dark alleys where steam belched from manholes. From afar, the characteristic whistle of the Chicago cop cut through the rumble of the nearby El. We had breakfast under the five-story Christmas tree, saw Santa Claus and shopped. For a family that never bought if it could be made or fixed, the day was a topsy-turvy medieval fair; a bender of bags and boxes.

I sang in the church choir and played hand bells in the carol service, in which the Nativity sheep were played by the five boys of the chinless Frye family. With wispy goatees (poor substitutes for chins) and thick glasses (they were near-sighted, too), they wore gray sweatpants and woolly socks on their hands, swaying with the music on all fours.

At home, our basement disgorged garlands and ornaments, all carefully labeled and ready for their usual places. We laughed at the acid-burned ornaments my father retrieved from Ben Franklin’s trashcan; too good to throw away. Each Christmas Eve, my mother filled the tree’s tin-foil cornucopias with gum drops and Hershey’s kisses just as her own mother had. In January, she packed these carefully away along with the equally ephemeral tinsel — perfectly good for another year.

There was the dance at the country club. We wore wrist corsages and ate cherries jubilee. The band was famous for having played at John B. Anderson’s party at the Nixon inauguration. While cuter girls got asked to dance, I, chubby and bookish, had to wait for the all-inclusive conga line.

My family’s annual Christmas party served up egg-nog, Christmas cookies and hot cheese biscuits passed around by our cleaning lady in a white apron. For months, I would hope that Justin McCarty, object of a crush since kindergarten, would find me pretty in my hand-me-down velvet dress with a lace collar. He preferred to play ping-pong.

It all culminated with Christmas Eve carols at the Shafer house. In a sleeveless Lily Pulitzer shift, even in December, Frannie Shafer played the organ. Older than my Depression parents, she smoked and drank like the Flapper she had been, belting out “O Little Town of Bethlehem” and “Jingle Bells” with equal collegiate gusto. When Justin McCarty’s mother admired mine for knowing all the words to all the verses of all the carols, I saw my embarrassing mother with new eyes. Walking home afterwards, the big, soft snowflakes of song and film brushed our shoulders.

But it wasn’t really always the same. Like a cinematic trick, the static foreground played in front of a moving background: me growing up; the 1960s. An older cousin spent one Thanksgiving flying a helicopter in ‘Nam. One year, our cocker spaniel got drunk on egg-nog from party cups left on a low table. Another year, Paulie Paddock — age 14 — got drunk at the country club dance. Minors were not allowed in the bar.

Careening through it in the conga line one year I saw the mother of one friend pawing the father of another. Altro che “I Saw Mommy Kissing Santa Claus.” Once, a judge’s daughter came to the Shafers’ in dirty bare feet and a faded Indian skirt. On her hip was a child named Rainbow. Rainbow had coffee-colored skin and wiry black hair and no father in sight.

It went on from there. The church burned down. My father had a stroke. My friend’s mother got cirrhosis; Frannie Shafer got lung cancer. Rainbow’s mother disappeared. Paulie Paddock went to prison. I moved to Italy. My children didn’t learn Christmas carols. The cambio di stagione never really worked as magic.

So a few years ago, I invited friends over to sing carols. Italians hung back in silence, watching us go maudlin over tree-shaped cookies with lurid green frosting. Children wore velvet dresses with lace collars. I barely remembered the words to the carols.

The next year I invited some more friends. And the next one after that. Now, I know the words to all the verses of all the carols.

The other day, I ran into a friend on the street. It was late fall, but my legs were still bare and my winter clothes on the high rack in my closet. “I hope you’re going to do Christmas carols again,” she said.

You bet I am. Her words got the magic going and all’s right with the world.