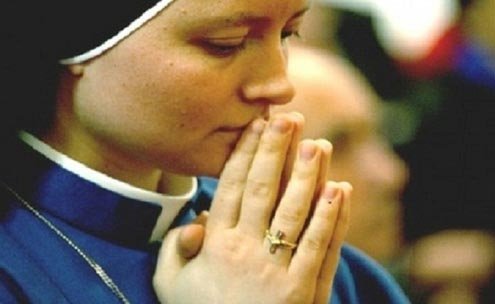 Do they notice cute boys, and if so what do they feel?
N

uns, oddly enough, have always played a role in my personal history — at times a demanding presence, at others nothing more than a flutter of a veil seen in my peripheral vision. Attending a Catholic elementary school, they featured prominently in some of my earliest memories.

There was Sister Mercian, a strikingly tall woman in her 60s whom I imagined had played basketball in her previous life, her thick legs patrolling our desks as we learned to write in cursive. She was strict but loved dogs, which I took consolation in.

When her golden retriever Mercy passed away she missed two days of school and we made her condolence cards. I drew hearts and crosses and what I imagined animal heaven to look like.

Miss Dwyer, our principal, was an ex-nun and terrified me. Her breath stank of sour cream and onion chips and she often wore a suit that reminded me of a zookeeper, beige and khaki and stiff. She once reduced me to tears when I wore a navy blue pullover that didn’t respect the dress code and sent me to confession for cutting in line.

Once she made us watch a movie about the miracle in Lourdes. I spent the following week unable to fall asleep, praying to the Virgin Mary to not appear to me even though I loved her veryveryvery much but I didn’t want to be sucked up to heaven with her and die an early death, and I reallyreallyreally hoped she would understand.

There was sister Edna, ancient in my youth and whom I still see from time to time, carefully choosing canned soup in the aisles of the grocery store. Sister Jean wore a crucifix the size of my small first grade hand. Lastly I remember Sister Tina. She was the youngest and I thought the most wonderful of the nuns. She played hopscotch with us at recess, the shifting of her skirts revealing a flat pair of tennis shoes that I coveted. I wanted nothing more than for her to remove her veil so we could finally see what her hair was like but she ever did. Some days I imagined it was blonde and fluffy, others that it was a vivid red. But I knew it was most likely simple and neat, like Sister Tina herself.

Living in Rome, I encounter nuns on a daily basis. They continue to demand my attention not out of the fear or reverence that I once had as a child but a strange mix of admiration and curiosity. The young ones, closer to my age, fascinate me the most. I find them all beautiful, their veils breathing upwards in sudden gusts of wind, moving like a flock of birds through the streets.

I’ve witnessed them reach down to beggars and take their hands, whispering into their ears. I once had a nun sprint through a crowd to return the metro card that had fallen from my pocket. These are all acts that one expects from those who dedicate their life to service. But at times, when I catch them in a mundane act I am startled. A nun thoughtfully choosing her ice cream flavors or buying a nightstand at IKEA are events that have both caused me to stare longer than necessary.

Nuns, then, are allowed to indulge in ice cream and new furniture? And beyond these small pleasures, do they ever yearn for trendy sunglasses or mascara, even if just for a moment? Do they notice cute boys, and if so what do they feel? But most of all, I find myself strangely envious of these women. While I would never dream of becoming a nun, I envy their sureness, their knowing.

At a point in my life where the thought of what to do next is a slow undercurrent of anxiety, the nuns set themselves apart. I yearn for their peaceful contentment, their faith, their triumph in finding their passion. Sometimes I wonder if they are so cheerful simply because the expectations of being a woman don’t weigh on them: finding the right boyfriend or husband, when to have children, how to support a family, how to have a career. I long for even an ounce of their confidence. The thought of even sharing with others my personal career aspirations unnerves me, while the nun distinguish themselves in their boldness, wearing their habits and proclaiming to the world what they do, who they are.

So I continue to study them on buses, in churches, at the post office, an unusual source of inspiration. I find myself wondering if they ever think of me as I think of them.