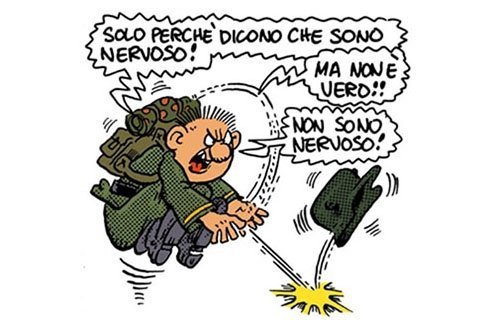 If he doesn't get his way, expect one outcome only.
T

here’s a man in my condominium complex who has decided he’s the boss of the place. He expects everything he wants to go his way. What he doesn’t propose, he resists or undermines. He’s admittedly done a lot for the building, which might be regarded as helpful or controlling, depending on your viewpoint. He talks a lot and you’re likely to see him hanging around on the stairs, in the courtyard, in the immediate neighborhood. I have an irregular schedule, which means I can come and go several times a day, but I almost always run into him. His strategic lobbying, or lurking, gives him plenty of time to get to know everyone in the building, chat them up, make jokes, and get them to like him. At each condo meeting he comes armed with deleghe — proxies signed by residents to allow him to cast their vote.

Though I’m largely allergic to such meetings, I do make an effort to attend if major decisions loom. The man, naturally, is omnipresent. If things don’t go his way, he uses his booming basso voice to cow people into changing their minds. If he doesn’t get his way, he usually storms out.

I say he has hysterical attacks, which may sound odd since hysteria is usually associated with fluffy women who exaggerate distress to draw attention to themselves. It wreaks of high soprano voices, and perhaps a bit too much makeup.

The word hysterical derives from the Greek for uterus, “hystera,” an organ once thought to wander around and lodge in some part of the body causing what today would be called conversion symptoms. Personalities who responded to stress in a volatile way were called “hysterical.” They were seen as overly reactive, tending to exaggerate emotional expression in an effort to be seen and admired. The condition was once considered exclusive to women, but Freud was the first to propose that men were just as susceptible.

Despite my therapist vocation, I don’t often use diagnostic terms, and I certainly would never use one as a weapon (which happens all too often, even by people who should know better.) At the same time I admit to being strongly tempted to do so, particularly in the presence of a man who dismissively talks over women, yelling at them as if he’s the smart man who righteously refuses to recognize silly and hysterical female thinking.

It’s admittedly rare to call a man who expresses booming emotional opinions as “hysterical,” and yet that’s just what he is. Sadly, he often gets his way because loud-mouthed aggression is often considered authoritative. In this paradigm, foghorn macho is “good” while the needy expression of emotion is “bad” (if not stupid or flat-out pathological.) Yet they’re the same thing.

I have plenty of businesswomen as patients. Corporate work, medicine, law, even professional cooking all share a certain macho mentality. As my patients acquire self-confidence, many begin moving up the career ladder. That upward path frequently puts them at odds with old boys’ networks, and subtle or not-so-subtle efforts to put them down. I tell them to think of these critics – men but also women who have risen to top positions — as needy children of a sort. A needy child will use any means possible to get what it wants and needs. Adults turn to bullying, including loud voices and body language, to assert a similar kind of superiority (much like a dog). The best defense is to refuse intimidation and to deal with such posturing outside conventional “top dog” rules. Turn it on end and apply maternal sympathy. “Oh, poor boy, you can’t get your way? Let me know when you finish your hysterical fit.” If you’re lucky, the condo meeting disrupter will just storm out.