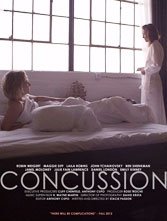 It takes a wise artist to inject new life into shopworn scenarios. Here, writer-director Stacie Passion takes a hackneyed conceit — the midlife crisis — and seamlessly reconfigures it to fit an alternative framework. Interior decorator Abby (Robin Weigert) and divorce lawyer Kate (Julie Fain Lawrence) are a married lesbian duo — Mrs. and Mrs. Ableman — rearing two children in the vacuous and gossipy upscale New York City suburbs where working out, gossip, yoga and child schooling is the conversational norm. Bored Abby, the housewife of the duo, is compulsive, inexperienced and little klutzy. An apparently minor head trauma causes her libido to jump, and with it a desire to take risks. This in turn leads to a head-turning encounter with hooker — facilitated by male friend Joel (Johnathan Tchaikovsky) — and her own decision to walk that path. Suddenly, she’s “a hot dyke housewife” who sees clients in her work-in-progress city loft, catering mostly to those as inexperienced as she.

The bored housewives conceit is hardly new, nor is the erotic twist, but it almost invariably takes the form of heterosexual nymphomania in which female behavior is tailored to male fantasies. This is something else entirely. Reading glasses perched on her nose, Abby uses her intimate new vocation — and the sex is beautifully handled — to feel her way forward and try to revive her wilted union with workaholic Kate. She wants what she’s never had: a sense of self (“I’m 42: something has to be me by now.”) She also wants to believe in a world that extends beyond the gloss (and myriad hypocrisies) of affluence. But the suburbs are pitiless toward gay and straight alike. Men are passive. Relationships fray. Petty and serious secrets abound. People lie.

Passion relays all of this in an uncommonly poignant way, giving TV veteran Weigert a chance to outline her character, which she does with a deeply admirable mix of intensity, adult wit, and occasionally sad bafflement.