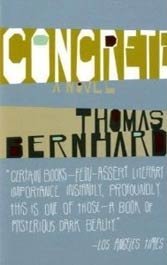 By Thomas Bernhard, translated from the German by Thomas McLintock

Kin to “Wittgenstein’s Nephew,” which preceded it, “Concrete” is another of Thomas Bernhard’s exquisitely bleak and brilliant disquisitions on the innards and annoyances that make up the cantankerous intellectual mind. For Bernhard, melancholy is a cunning and sneaky muse. It nags a man into hating everything about himself and the world around him, only to transform the details of the lashing out into a lump sum affirmation. Enchantment comes only through ranting.

The Rudolph of “Concrete” is a wealthy, 48-year-old recluse who lives in a rural Austrian town, Peiskam, where he celebrates his ailments and berates himself for having failed to start a biography of Mendelssohn. “My life now consists only of self-observation and self-contemplation, which naturally leads to self-condemnation, self-rejection and self-mockery.”

Visits by his Vienna socialite sister only produce further waves of hate, directed variously against state, religion, people, and pretense. Highly disciplined in his personal disregard, Rudolph refuses to leave his “black, hideous, revolting, stinking bog of loneliness” lest he have to face “unendurably brainless people.” Agoraphobia soon turns into black revelry and black revelry into an intellectual Gatling gun that delivers a hail of reflections regarding what it means to be alive.

Bernhard, who died in 1989, remains among the 20th-century’s headiest and most generous misanthropes. His stricken speakers, while vocationally unlikable, are nonetheless unfettered, enchanted beings constantly at work figuring out what makes people tick. Self-loathing, in Bernard’s hands, is ordered to be constructive. Milked, as it were. Without characters he still makes literature.

Tame Bernhard’s screed and you get to the underlying boy: “When we really know the world, we see that it is just a world full of errors. But we are reluctant to part from it, because in spite of everything we’ve remained fairly naive and childlike…” It’s that naïve and childlike side that gives the monstrous its luster