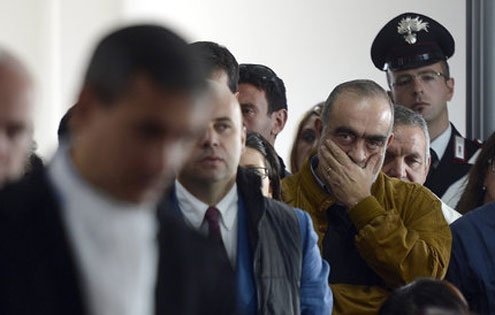 taly treasures conspiracy theories. Groups of people, not individuals, cause big events to occur. Anything meaningful is connived and contrived, either through deliberate scheming or equally deliberate omission. John Kennedy was not killed by one man but by a cabal of enemies. The ouster of Richard Nixon was a liberal con job. Successive Italian governments were in the hands of Masons. September 11 was a presidential plot to trigger long-planned American reprisals. The breakdown of Wall Street, and of the euro since then, is a manipulation by agents who, like Olympic gods, amuse themselves by causing misery to those who can least afford to suffer it.

This pre-enlightened view of events, call it a refusal to banish folklore, has long made the rounds of enlightened circles, including the Italian legal system. It accounts at least in part for the controversial decision to convict six scientists for failing to predict the 2009 Abruzzo earthquake, on the face of it an absurd charge followed by an absurd ruling, for manslaughter no less. Much of the scientific world is outraged.

The idea that scientists, specifically seismologists, should be held accountable for failing to vet and transmit forecasts, perceived by a judge as a negligent act, is tantamount to punishing meteorologists for failing to correctly announce rain in the right quantities.

Preposterous. Yet last February, when it snowed heavily, and earlier in October, when it rained less severely than forecast, the mayor of Rome criticized not only the local civil protection agency but also meteorologists, whom he chastised for unduly alarming local citizens. His forays were a harbinger of the earthquake verdict.

Italians, deeply anarchic and fond of disputes and deliberations, have a peculiar relationship with institutions, whether led by politicians or scientists. A belief in the primacy of vested interests, family or regional, informs a deeply held skepticism — a legacy of centuries of papal intrigue — that ironically acts as both a general provocation and a national bonding agent. Among the reasons Italian families have so far suffered the euro crisis less profoundly than Greeks and Spaniards was their resistance to indiscrimate credit, bank loans, and massive stock purchases. The state borrowed far more than citizens, many of who were reluctant to relinquish the personal information necessary to get financing. Weren’t banks really fronts for more arcane interests? Weren’t stock markets at the mercy of a “them” that might betray their investors on a whim?

It takes very little conspiratorial kindling to light a fire, and the 2009 quake was an incendiary issue from its immediate aftermath.

A month before the quake, an Italian researcher named Giampaolo Giuliani inadvertently biased scientific inquiry by openly warning that winter regional tremors — so-called earthquake swarms — were a harbinger of worse to come. He posted a video citing an increase in radon gas, a telltale earthquake indicator, or so he, an amateur, insisted. His warnings led to a meeting between the country’s civil protection chief and the country’s major risks committee, whose scientists rejected Giuliani’s claims as pseudo-science. That rejection, reasonable enough, sowed the seeds of the recent convictions.

Following the quake, Giuliani barnstormed Italian media, his “I told you so” mantra fitting hand-in-glove with a long-held idea that “certain people” know “certain things” but do their best to quash what they know and ostracize those brave enough to tell the truth, in this case Giuliani. His talk radio approach to earthquake forecasting made an indelible impression on Italians north to south, all the more so in scarred and broken Abruzzo, openly in search of plots and scapegoats.

Though Giuliani’s “fear-mongering” was widely reported and widely dismissed, both in European and American media, it stuck under the Italian cuticle in a way that’s indigenous to a country that has long been desperate for simple explanations to complex problems so that it can move on to debating the next woe.

Even the man charged with reining in Italy’s spiraling public debt, Prime Minister Mario Monti, a veteran economist as effective as he is dull, has managed to stir up rumors that his real bosses are arcane bankers and financiers. To conspiracy theorists, his focus on harvesting personal income taxes to stanch the Italian financial hemorrhage “proves” complicity in a Northern European (read German) plot to make Italy a permanently subaltern state.

Italy’s nearly unconscious tendency to entertain conspiracies, a tendency that has remained intact for a century, reflects an absence of operating daily civics, which promotes the idea that governments and citizens are ultimately on the same field. Enduring discrepancies in education and salaries between the country’s successful figures and its working class, as well as the small role merit plays in getting ahead, reinforces an Oz-like idea that the more powerful mock the less powerful, with a curtain in between. The astonishing ability of multinational underworld groups such as the Mafia (in Sicily) and Camorra (in Naples) to flourish despite decades of task forces and crackdowns can mean only that their existence serves someone’s interests. So do verdicts that over the decades have absolved leading government figures of negligence, complicity and cover-ups in connection with terrorist acts, many of whose origins remain a mystery.

While domestic and foreign scientists (as well as expert intellectuals) are well within their brief to call the Italian ruling “medieval,” and even to label the case itself preposterous, their conventional outrage misses the non-Anglo Saxon intent of the verdict, which was to give a widespread sentiment a rare happy ending.