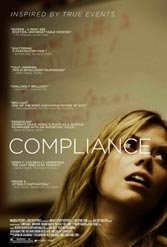 Craig Zobel’s menacing little number about the consequences of gullibility and blindly following orders is based on a small-town Kentucky McDonald’s prank in 2004 (though similar incidents were reported before). In a fictional Ohio fast-food joint called ChickWich an impressionable manager named Sandra (Ann Dowd) takes a call from a man identifying himself only as an “Officer Daniels” alleging that one of her employees stole money from a customer. He claims also to have a chain supervisor on another line. From that moment on, Sandra kowtows to the authentic-sounding officer’s every order, which eventually include included coaxing the employee (Dreama Walker as Becky) into a strip search, opening the door to sexual degradations that soon involve a number of reluctant but ultimately willing participants. A fast-food refrain —”How may I take you order?” — greases the wheels of an unsettling point about deference to “police” authority.

It’s worth noting that Sandra, Becky and the submissive men around them are capable of only the tamest remonstrations no matter what they’re “ordered” to do. No one second-guesses the cajoling caller’s outrageous requests or makes any effort to confirm his identity. No one talks back (“Address me as Sir,” he cows them). Zobel uses his movie’s manipulative (and tedious) first hour to illustrate what some people will grudgingly play along — with eager-to-please Sandra in the don’t ask/don’t tell forefront.

Only toward the end, as Zobel ties up lose end, does a real police officer ask abused Becky the most obvious of questions: “Is there any reason you just didn’t say no?” Her reply is a murmur of postmodern resignation outside all common sense and part of a more general sordidness of spirit. Still, in a post-9/11 age that defers to security and accepts a great deal of servitude on its behalf, this is nasty reminder of what can go wrong in a non-urban setting in which skepticism breaks down, making compliance into complicity.