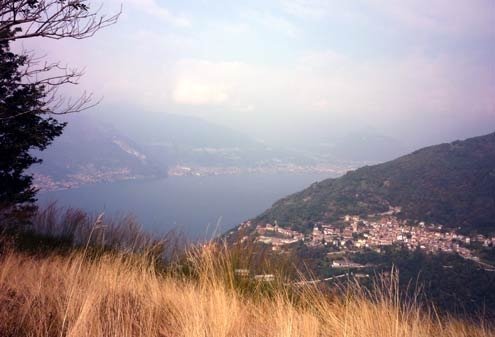 ake Como in Lombardy is one of the easiest and prettiest places to get to from Milan. Trains head north to the cities of Como and Lecco and brush along the east side of the lake. From any of the whistle-stop towns, you can take a bus into many of the alpine valleys or start on foot and find a hiking trail leading up over the lake. You can walk completely around Lake Como on mountain footpaths. It has a mild climate in winter making it an ideal destination for a season of shorter days.

It’s late fall. We are hiking from the town of Dervio on Lake Como (213 meters), up a higher trail to summer grazing pastures called Pratolungo and down to the town of Bellano. It’s a six-hour walk with a two-hour climb of about 800 meters. We take the train from Milan’s Central Station to Lecco and change to Dervio. A Mecca for British tourists, sailors and windsurfers, Dervio sits on a point that juts out into the lake.

It was a strategic position even in Gallic-Roman times when towers controlled movements from Como, all along the lake and into the Swiss Alps. Mirror flashes by day or bonfires at night warned of invaders or marauders. Subsequent rulers — Goths, Longobards, Franks, the dukedoms of Visconti and Sforza, the Spanish and Austrians — maintained the defensive system. In the 1800s, the Austrians took advantage of mineral and iron resources from the alpine valleys and the abundant energy generated by the rivers to develop industries. However, tourism is now the major industry.

Behind Dervio station, we take the road right to an ancient bridge over the Varrone River and the stone church of Saints Quirico and Giuditta, built before 814 A.D at the foot of the mountain. The original, eleventh century bell tower is a national monument. Behind the church, red-and-white striped Club Alpino Italiano (CAI) signs mark the mule trail. The stone stairs and ruin walls were part of the defense system dating back to the fifth century. They led to Castelvedro, a castle warning tower, above Dervio at Mai.

Whenever we come to forks on the path, we keep right following CAI stripes to Pianezza (342 meters), where a sign indicates a ten-minute deviation to Mai.

Little of Castelvedro remains. I suspect the stones were pilfered to build baite, shepherds’ cottages, still used for summer residences in Mai. But a smell of oregano accompanies the windswept view of the lake from the rocky outcrop overlooking Dervio. The baite with their gardens and lawns are immaculate and families enjoy the last autumn days.

I hear “Row, row, row your boat.” A red-headed woman and five children sit atop a huge stone and pretend to paddle on a make-believe river. I recognize my Irish neighbor from Milan. Her Italian in-laws emerge from their baita with mid-morning snacks.

I wave. “Didn’t expect to see you here! We’re going to Pratolungo.”

“Go back to Pianezza,” mother-in-law Elena says. “From there you can take the steep path or go down three switchbacks to an easier path on the right. It meets the main trail further up.”

At Pianezza we walk down to a half-hidden sign marked “Pratolungo 1.45h,” pointing right.

We hike up to the main trail and then take another deviation on the left to Vignago, a hamlet with a view of the treed valley of Valvarrone. A good place to find chestnuts and wild mushrooms, the valley used to bustle with mining activity. The trail was important for the transport of minerals.

We fill our canteens with water and continue to Cangiaco and the communal pastures of Pratolungo. Goats penned near a baita greet us. We hunker out of the wind to have lunch and then snap photos of the lake 800 meters below.

Afterwards, we descend the wooded path to Noceno. As the name suggests, many walnut and hazelnut trees grow here. We visit the cemetery of San Gregorio church where epitaphs to “marito fedele” and “madre esemplare” honor faithful husbands, exemplary mothers and sons lost in many wars.

From Noceno we walk to Pendaglio. At a small church and a house with a dried mouse impaled on the front, the path crosses the “Viandante,” a lower trail that follows the entire east side of Lake Como. A homemade sign points towards Bellano. We walk between terraces of olive trees typical at this altitude.

Just above Bellano at Lezzano, we arrive at the Santuario della Beata Virgine or Madonna delle Lacrime, also known as the Santuario di Lezzano. It is a Rococo (1690) pilgrimage site built to commemorate a medallion of the Madonna that miraculously cried tears of blood in 1688. Like so many of the numerous churches on Lake Como, it commands a strategic view.

We descend to Bellano, a town of gardens and villas, whose name actually derives from Latin bellum, meaning “war zone.” It was the summer residence of the Archbishop of Milan in medieval times. Local feudal lords would sack its wealthy homes. We peer down the Orrido, a bottlenecked gully of the rushing Pioverna River. Then we head through winding lanes in the old quarter to the lake for a stroll and ice cream. Palm trees line the boulevard. Sailboats bob in the waves off Dervio. The mountains rise behind.

— To get there: By train, consult Trenitalia. It’s on the Milano-Lecco-Sondrio-Tirano line. By car, drive to Lecco on Provincial road SP72 or state road SS36 (exit Dervio-Val Varrone). Further information at Dervio.org, Trekking Italia or click on Lecco at Lombardia in detaglio.