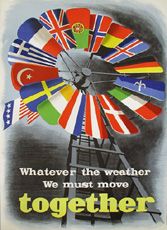 Whatever the weather we must move together...
H

istorian David Stafford recently published a commentary offering cautionary advice to critics of Bush Administration strategy’s in Iraq. Remember, he wrote, that post-war Germany was a sort of apocalypse, devastated, debauched, fecal. The Nazi Party, which was dissolved (as Saddam’s Ba’athist Party was in Iraq), held vestigial sway. A haunted (West) Germany teetered on the brink. So, in fact, did the entire Allied occupation plan, which in the years after 1945 met with increasing national hostility. At this juncture, almost casually, Stafford offers an caveat: “Only the Marshall Plan, with its massive program of financial aid, saved the country from disaster.”

The remark is tantamount to saying, “Only God, with his seven-day plan, fixed things up.”

The Marshall Plan, Ayn Rand big, proposed literally to fix Europe. That the repair effort was motivated at least in by fear of Soviet encroachment matters less than the plan’s scope. Most liberators preferred taking to giving. This was different. To use the going verb, America committed.

Postwar context is fundamental to an understanding of why.

The war-cut peoples of Europe were America’s own humbled ancestors, the pulp of a mythic pipeline that for a century fueled and filled America itself: whites, Jews, Protestants, Catholics, a mumbo-jumbo of familiar ethnicities down on their social luck. There was much “us” in the demoralized “them” in Europe of the 1940s.

The Marshall Plan facilitated and rewarded this kindred-ness. To get to the future America had to be generous with the past, its own. To hold off Bolshevik forswearers, America needed to pump-up and sway the tempted. Thirteen billion dollars — then a staggering sum — was allocated to Europe between 1948 and 1951, primarily to Germany ($1.5 billion), France, Holland, the UK, and Italy ($1.2 billion). The inflow laid the groundwork for the European Economic Community, now the European Union. Japan, under Moscow’s watchful eye, wasn’t included.

In essence, Europe got a New Deal. “Our policy,” Marshall said in 1947, aware of Soviet objections, “is not directed against any country, but against hunger, poverty, desperation and chaos.”

Iraq, which based on location and influence, is arguably a Middle Eastern Europe, will reap no such benefits. The reasons are superficially politically — the wish to encourage self-reliance, an awareness of potential oil revenues, etc. — but are more realistically tribal. The United States cannot foster a massive recovery plan for a nation whose ethnic character is not only recondite but hostile. Freeing Europe visibly involved freeing of ethnic brethren. “Freeing” Iraq has let loose a Mongol brood.

After World War II, writes Stafford, German “anarchy was quickly and forcefully stamped out, and enough Allied forces remained in the country and in all major cities to impose stringent and often ruthless order.”

Whether the American military presence in Iraq is as dominant as it should be debatable. But regardless of its size, it’s unlikely that such a force could quickly and forcefully stamp out anything. Core resistance is embellished in proportion to the cultural and religious alien-ness of the intruder. The more pronounced such alienation, the less likely the would-be liberator will establish a foothold. Suspicion infects the divide. Altruism collapses. In this sense the Iraq of 2008 is not a country but a gangrenous wound. Profit-seeking companies and the states behind them do not invest in malady. They await a fix, then act. Even when there’s oil to be had.

By the mid-1950s, Aryan Europe was back on its feet and available to (dollar) commerce. The Marshall Plan worked. The billions invested reaped rewards, and deepened the Cold War as the cash-poor Soviet Union grew angry and defensive, filling in economic blanks with hydrogen bombs. America’s friends were its friends again. A disrupted cultural neighborhood was restored, and indebted.

Iraq is outside the neighborhood. So was Viet Nam). Viet Nam’s alien-ness proved convenient when the United States disengaged in 1974, rationalizing it had fulfilled its obligation. Peace with honor, it was labeled. Iraq will be similarly abandoned, with similar extenuations and explanations offered in exchange. Only the timetable is up for grabs.

“Rebuilding a nation is possible,” Stafford concludes. “But even in the best of circumstances, it takes effort, time, patience and pragmatism.”

But such attributes beg a central component: empathy. The liberators must empathize with the liberated. They must also cold-bloodedly assign a value to that empathy, which the Marshall Plan — narcissistic and generous at once — did. In Iraq, the United States freed not Munich but Mars. It recognizes nothing of itself in that nation’s humbling chaos. And it what it will not recognize it cannot not help.