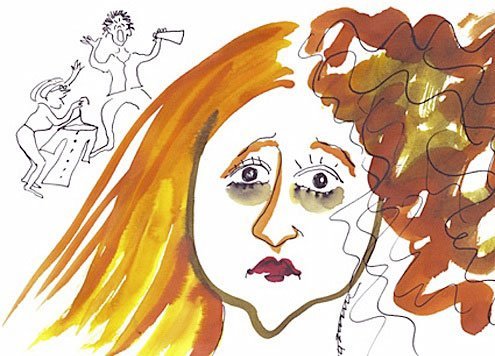 I huddle over a garbage bin with the light technicians and wolf down 15 chocolate chip cookies.
S

even a.m. — On a sunny Saturday morning, I grab a cab from the Vatican to Ponte Milvio where I’ve been told I’ll be acting in a “glamorous” commercial for British TV. For the occasion, I’ve painted my toenails Revlon’s “fire-engine red” and blown-dry my hair to a straight silk. Arriving at the shoot site, makeup artists greet my peppy looks with approving nods.

8 a.m. The hair stylist blow-dries my already dry hair, frizzing it up, then pinning it back in a bun. The makeup artist puts dark circles under my eyes (I’m supposed to be tired after a long day’s work). The costume designer suits me up in an orange and black paisley skirt and jacket. I am a Halloween nightmare.

9 a.m. Other actors mill around in anticipation. We all wear suits. Someone has a schedule. Robert, smelling of cigarettes, says he’s on call for 10 a.m. and lends me his International Herald Tribune. I read it cover to cover but lose my bearings since Robert interrupts constantly to describe his experience acting in “Gangs of New York.”

10 a.m. My Turkish friend Ayellet and I realize that we’re in the same scene but that it hasn’t been slotted into the schedule. We met at the audition and the callbacks. She is dressed in a lime-green dress and yellow open-toed heels. Someone tells us we’ll be up before lunch. Exhausted, I fall asleep on a scratchy grey couch in the makeshift costume room. Robert, in his late-50s, snores lightly through his nose on the other couch. The multicolored hanging clothes separate us.

11 a.m.Someone enters the room to get Robert, and he awakes with a half-snore. “Huh? Yes. I’m coming,” says Robert. I pretend to be asleep. Then I am. Again.

Noon Robert re-enters exultant. “If only making a buck could always be that easy,” he chortles. When Robert changes and leaves, I figure it’s time to rouse myself. The costume woman is unhappy I fell asleep in my beautiful orange jacket. The makeup woman sits me down in the black leather swivel chair to re-emphasize my circles under my eyes — they now look like bruises. The hair stylist unpins my bun and repins it, ensuring it still has that never-been-combed look.

1 p.m. Lunch! Wasn’t our scene supposed to be before lunch? Ayellet points out that we have mistakenly sat in the tent with the extras instead of the troop. The air smells like freshly cut tomatoes. Warm and golden sun shines through the tent and birds chirp in the trees. A good day to go to the beach. Maybe we’ll get our scene in after lunch and have the rest of the day free. The costume woman instructs us to change out of our costumes before eating. Ayellet wonders why we’re the only actors ordered to change our clothes.

The troop has strawberries and Coca-Cola but the extras don’t. A grip from the troop brings strawberries to the cute extras. The men in our tent are out of luck. Despite my circles, I’m rewarded with a small cup of strawberries. I think it’s because I changed out of the orange suit. I’m sure the grip wouldn’t like paisley.

An extra is wearing the adorable suit that I had tried on in the prove costume: an expensive blue suit and a white collared-shirt with happy flowers on it. She gets lots of strawberries from the electrician. He even brings her a packet of brown cane sugar.

2 p.m. After lunch, Ayellet and I change back into our scene attire. Redo makeup (touch-up the circles, of course) and re-frizz hair.

3 p.m. We are called to the scene. My feet are starting to hurt from the four-inch heels. Our scene has been cut, but the director would like us to do “something very important.” We are asked to walk out from behind a column and away from the camera. I doubt anyone will ever recognize our butts. We aren’t told why they’re filming this shot or how it fits into the commercial.

I peer out from behind a column and pretend to look for something in the distance near the camera before slowly turning away. It’s another €400 if my face is inquadrata, so I give it my best effort. But then I realize that I’m in an orange paisley suit and have bruises under my eyes. Maybe best not to look at the camera.

The Italian assistant director spits “Non capiscono un cazzo!” and, “Why is her hair so messy?” pointing at me. “You call that makeup?” The makeup artist tries to explain that she understood that we were supposed to be tired. The director is unconvinced. “End of the day, natural-looking with little makeup, not destroyed,” he howls.

4 p.m. We don’t know if we’re still needed, but it seems we need to stay. I lie face-up on a desk and sleep for another hour.

But the director isn’t satisfied. “The fat guy in the red vest is too far from the desk. Push him in,” he barks. Giorgio asks the man if he can move closer to the table. The red-vested man nods frantically and sucks in his stomach. “He’s still too far from the desk. Push him closer,” the director shouts. Giorgio looks at the man. “His stomach is over the desk,” he tells the director on the walkie-talkie. “We can’t move him closer, but how about we try moving the desk back a bit?”

6 p.m. Ayellet wants to ask Giorgio if we are still needed. Paul, the lucky actor who had a call time for 4 p.m. for a 6 p.m. scene, warns against it. Someone else did the same and was sent home, he says. I begin to think that wouldn’t be a bad idea.

7 p.m. I huddle over a garbage bin with the light technicians and wolf down five handfuls of pistachios followed by 15 chocolate chip cookies. Bless those Brits for bringing biscuits. Now, I feel sick.

Teo, a driver in jeans and a tight grey T-shirt, tells me that the soles of my feet are dirty. He says he noticed it while I was asleep. I take off my left shoe to inspect it. Just kidding, he says. I hope I slept with my legs crossed. This orange skirt is short.

8 p.m. Somehow, Ayellet and I have been placed behind the monitor where the British clients are watching the production. They have flown in from London to ensure the commercial properly represents their “happy” product. We look like orange and lime rocks. The youthful British head client has floppy brown hair. When he sees some footage he drops his face into his hands and moans, “Not the same thing again!”

“See the little smile?” the Italian director protests. He slows the footage so Floppy Brown Hair can see it. The British client is not convinced. “But I want a big smile! I want a ‘Yes!’ I want a triumphant smile, not a shy smile.” I’m getting motion sickness from seeing the two-second smile clip repeated in slow motion for five minutes. Or maybe it’s the chocolate chip cookies.

The Italian director explains that it’s only the first clip. Best not to give it all away, he says. When the director leaves, the British client tells his team, “And it looks like the actor goes into a period of retardation before he grins. Quite frightening really.” Paul gets the triumphant smile right the next time up. Floppy Brown Hair bolts from his blue folding chair: “Yes, yes, yes!” he screams. His team claps dutifully. Paul emerges and waves goodbye.

9 p.m. Ayellet is unstoppable. She corners Giorgio and asks if we are needed. I remain positioned behind the Brits, reading about Baby Spice in a neglected tabloid. Giorgio decides on a line-up to determine who makes the cut for the final boardroom scene. He asks us to change our clothes.

In the costume room, Ayellet and I strip down to our underwear. We place our clothes into the costume designer’s outstretched hands as we disrobe. The costume designer changes me into a cream-colored suit and Ayellet into a brown dress, zipping us up in the back and then tugging at the material in the front. She looks us up and down, nodding without looking at our faces. As we walk back, a British woman points at me. “The client doesn’t want her in that suit,” she says. Giorgio asks me to change. This time I get a mauve suit with gold stripes.

10 p.m. The director lines us up in the garden to make his choice. The high grass scratches my legs. I am the first one picked. Then comes a German man playing with his iPod, a bearded-boy, and a girl whose father is standing on the curb waiting for her. After the selection, Ayellet runs up to me to offer condolences: “Che jella! Che sfiga! Che sfiga nella sfiga!” She can go home. Dinner is catered mozzarella and sliced pork. I’m full from the chocolate chip cookies, but have some mozzarella.

11 p.m. The lucky four of us sit on a stoop, clutching our knees, waiting. The air is getting cold. The German lends me his iPod. The girl and her father speak in Chinese. He is wearing a suit of his own and blends with us.

Midnight The young producer opens the door to the stoop, his face bathed in shadows from the light behind him. He announces that they’ve decided not to shoot our scene. “You can go home,” he says, waving his hand dismissively and closing the door behind him. I slip my heels off and walk my fire-engine-red toenails to the exit. Such glamour!