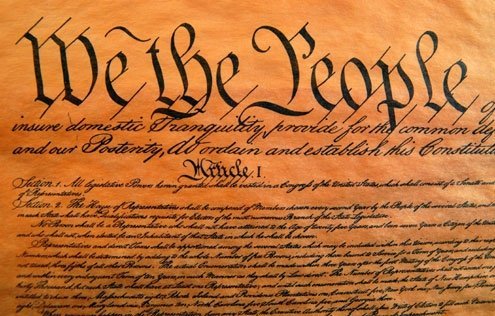 ome laws need explanation. Others are understandable based on their nature. They affect our shared feelings of right and wrong. That you cannot kill your noisy neighbor is morally self-explanatory. Yet the less straightforward laws can often be most interesting ones, particularly if they undergo constitutional court review.

The Biblical Ten Commandments, standards to live by, were delivered from Mount Sinai by Moses. Many religions have since adopted them in one form or another. Sermons and teachings served to explain and interpret them over the centuries, understandably since each generation wants to understand the laws and beliefs that individuals and communities are asked to live by, and to sense they are true to human nature.

Democratic laws are not commandments. They are debated in legislatures before being passed and taking effect. In a perfect world we’d like to believe that all sides are heard for all proposed legislation, the final vote the culmination of a rational process in which each legislator has acted freely, without political pressure, according to conscience. But the world isn’t perfect and laws can be passed for political reasons that can violate either our sense of right and wrong or even our national constitutions.

For spiritual matters, we each have our conscience as guide: the court of the soul can be unforgiving. But for errant legislation, we must often turn to the national constitutional court to arbitrate whether a law is acceptable.

This is where things can get interesting.

In the United States and Italy, the constitutional court exists to review matters of law in light of the wording of their country’s respective constitutions. Here is where the similarities end. The constitutions of the two countries came into being during different periods of history. The U.S. Constitution was adopted in 1787, after the Revolutionary War, while Italy’s was drafted in 1948 following World War II.

Logically, each constitution was written to reflect the times and cultures. As a result, the U.S. constitution concentrates much of its power on the protection of individual rights, while Italy’s focuses on social justice. Combine these divergent perspectives with a parallel debate — whether the wording of a constitution should be applied literally or be interpreted in light of current affairs — and you get a wonderful mix of profound historical and cultural forces on which inspired judges can bring their intellectual and spiritual power to bear, having an impact on how we lead our daily lives.

I remember a non-constitutional case in Colorado where a man shot and killed his neighbor’s dog because he said it was bothering his horse. Colorado law at the time permitted the killing of animals that were “worrying” livestock. The dog’s owner acted as his own lawyer and, though he had never tried a case before and presented his evidence haphazardly, the judge found in his favor. Why? The killer of his dog was not being “neighborly” and acted outside the “spirit” of the law. Judicial interpretation all the way. His implicit message: “Talk before you shoot.” Whether the decision was correct depends on your legal vantage point.

The U.S. and Italy initially approached abortion similarly. Since abortion’s legality is not addressed in either country’s constitution it was left to legislatures — in the U.S. those of the individual states, in Italy the national parliament — to rule on legality. Though Italy is home to the Roman Catholic Church and the Vatican, which vehemently opposes the practice, a woman’s right to an abortion in the first 90 days of pregnancy was guaranteed a secular, legal framework beginning in 1978. Abortion clinics are publicly funded and supervised.

U.S. abortion laws are state-managed. Restrictions vary, usually based on circumstances and the length of a pregnancy. In 1973 the U.S. Supreme Court waded into deep water by taking on the Texas appeal case of Roe v. Wade. Jane Roe was an alias for Norma Leah McCorvey, an unmarried woman seeking an abortion, while Wade was Dallas County District Attorney Henry Wade, who argued for Texas’ longstanding anti-abortion law.

The Court struck down the Texas law as overly restrictive, thus bringing abortion under the “right to privacy” penumbra that the Court had intrinsically tied to the Fourteenth Amendment’s due process clause. The clause bars state and local governments from depriving persons of life, liberty, or property without applying Bill of Rights-style fairness. Privacy, said the Court, was a fundamental aspect of personal liberty.

The 7-2 decision touched off a firestorm regarding how the U.S. Constitution should be read and applied. The justices who opposed the verdict, Byron White and William Rehnquist, were livid, calling the majority decision an “improvident and extravagant exercise of the power of judicial review” in their vivid dissent. In the late 1990s, “Jane Roe” McCorvey joined the Catholic Church and became a pro-life activist.

Four decades later, the ruling remains among the most controversial in U.S. history. But few actually take the time to read it. It’s a remarkable ruling whose wording addresses constitutional history in the context of modern science and societal concerns, seeking a solution that attempts to balance them all (“Population growth, pollution, poverty, and racial overtones tend to complicate and not to simplify the problem,” the Court wrote). Whatever your view of the outcome, judicial thinking and a methodology are on full display.

If you’ve never read a constitutional opinion then here’s a deeply worthwhile place to start. It also serves as a leg up on my next column, which probes Italy’s judicial workings.