Coming of age, in English 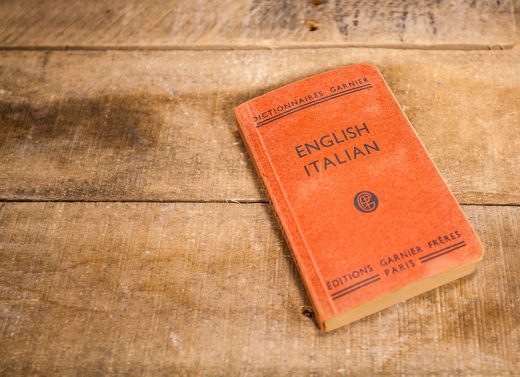 The author worked hard to slowly learn the complex vicissitudes of the English language.
I

first became aware that there were other tongues beside my maternal (and paternal) Italian when I was nine. At the time — it was 1959 — I was a third year pupil at the elementary school in Alezio, a small town in the southern Italian province of Lecce.

That there might be words and expressions to communicate and describe the world other than the ones I used every day in my native village, in the east-southernmost tip of Italy, was totally out of my imaginative reach.

In a time when computers and Internet (to say nothing of mobile phones) were beyond our wildest science fiction dreams (in Italy, even television was in its infancy), living in a small country town was a bit like living at the edge of civilization.

Yet there had to be a reason why the place a few miles south was incomprehensibly called finis terrae, the ends of the earth.On the other hand, my family could speak only Italian and the local dialect. At school, the notion that elsewhere, other people used exotic utterances to exchange information had not yet been elucidated into our young minds, still struggling with the complications of Italian orthography.

But one day, out of the blue, some relatives of my father’s who had migrated to London in the early 1950s,came to visit us, with their two small children. I heard the two adults speaking to the young ones and also heard their replies. But, to my amazement and enthrallment, I could not understand a single word they spoke. After they left,I asked my father what his cousins were talking about with their children, with whom I had tried in vain to interact. They were probably explaining what kind of biscuits we were offering them, or so he imagined, since he confessed his absolute ignorance of the English language.

That there might be words and expressions other than the ones I used was totally out of my imaginative reach.

So there were other languages! And English was just one of them. I discovered there was also French, which I would probably be studying in a few years at the scuola media, secondary school, and German, Spanish, Russian, Dutch and so on. Every single nation hadits own language. What a mess, but also what an egregious discovery, more egregious because it seemed there was a way of learning these other vehicles of communication as you ascended the higher levels of education.

In fact, when I started scuola media, I was assigned to a French language course. Still under the spell of my brief encounter with English and holding out faint hope I might be able to study that language, I was more than a bit disappointed. Though I came to love French as well, I spent the first year nursing a growing sense of envy every time I saw my friends, on the bus that transported us to nearby Gallipoli, proudly displaying, or so it seemed to me, their English textbooks tucked under their arms (at the time, in small villages like mine only the first step of the educational ladder was offered, then you would travel to nearby and larger towns to attend scuola media, a three-year interlude before you chose liceo or upper school, usually located in the same towns).

When the first year of middle school ended in June 1962, I had an illumination. My lucky schoolmates, on whom fortune had smiled, would not open their English grammar books until October 1st, when the new school year would start. So I asked one of them, a girl who lived next door, if I could borrow her English book for the summer. She kindly agreed and almost every day I spent a couple of hours studying and doing the grammar exercises. I learned every single rule and memorized vocabulary, expressions, and idioms. With the meager resources of my weekly allowance I had also bought a small Collins Italian-English dictionary at a newsstand in Gallipoli, which helped a lot in building a vocabulary powerful enough to astound my parents and the small family circle. I would name things in English as they listened in awe. 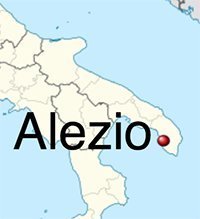 One of the problems I immediately had to face was pronunciation. I soon discovered that the first pages of the grammar book listed a series of symbols. These were my first acquaintance with the International Phonetic Alphabet. All possible sounds of the English language were reproduced in the form of signs that you had to learn to ensure correct pronunciation. A slight slip of the tongue could distort the meaning of the word, maybe with embarrassing consequences. I also discovered that pronunciation rules were largely unpredictable compared to French, and that was the reason why every English entry in the dictionary was followed by the instruction for correct articulation with IPA symbols.

October came and I had to hand back the book to its legitimate owner.

One of the things I had inherited from my father was a devouring passion for reading, and I had started to scour his ponderously overloaded bookshelves. Among the double rows of old and new books, I came across an extraordinary find: an English grammar book for Spanish speaking learners.Still incredulous, I showed the grey-greenish hardboundvolume, “Gramática Para La ConversaciónInglesa, (Con VocabularioInglés-Español Y Español-Inglés. PronunciaciónFigurada en Español,”published in 1922, to my father, who told me that the book had been there for so long that he had even forgotten about its existence. And that’s how I figured out that my passion for languages might derive from a gene passed on to me by my paternal grandfather, whom I had never met, since he had died a few years before I was born. He had migrated to Argentina, settling in Buenos Aires, in 1924 and spent several years working there in the construction industry. When he came home, he brought the book with him, and it had been sitting there ever since.

So now I had my own English grammar, though intended for Spanish speakers. But for an Italian in love with languages that was not an insurmountable hindrance. I found that I could easily understand Spanish and that an Italian-Spanish-Italian dictionary was available at the same newsagent in Gallipoli where I also spotted, for the first time, a copy of the Rome “Daily American” newspaper. It was displayed behind the counter, along with French and German newspapers. I started buying it, at first once a month, then once a week (it took me ages to read it, and I would skip sports and business, uninterested in either). In the meantime, my father, who at the beginning had been quite skeptical about my endeavor, had persuaded himself that I could succeed, and had bought me a huge “Hazon English Dictionary,” which allowed me to read the American newspaper dispatches with ease. 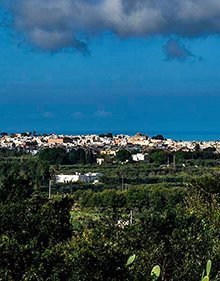 A view of the author’s native village of Alezio. Photo courtesy of Michele Piccinno.

The mid-1960s brought television to our home, but I, defying the mainstream trend, became increasingly interested in our ancient radio set, an Allocchio-Bacchini of venerable age but still serviceable, with its burr walnut case, a green eye in the middle, and a short, medium, and long waves frequency chart printed on the lit-up display. Dozens of radio stations from all over the world were listed and you could tune in and listen to the voices of people speaking from the far corners of the planet. I started to select all the stations that broadcast in English.

Those were Cold War days, with West pitted against East, and all European national radio stations, using short wave, produced and aired propaganda programs in various languages aimed at foreign audiences. They all had an English section, broadcasting a daily program anchored by English native speakers.Of course, I would listen most regularly to the BBC World Service, which my veteran radio could catch perfectly, especially in the evening. And that was a turning point in my efforts to learn English, because, to my elation, I found out that one of the programs the BBC transmitted was “English by Radio.”

With my limited but already efficient English I wrote to Bush House — the World Service headquarters in London — asking for information. In due course they started sending me a leaflet with the printed lessons that I could follow on the radio from home. And all this for free! And it went on for years, until I was old enough to travel to London and live and work there for some time (in a mental hospital, of all places, but that is a story for another time), before completing my graduation degree in Foreign Languages and starting a career as a teacher of English and a literary translator.

And that’s how I came to write this piece for The American Mag, intended in part as a tribute to its ancestor, the “Daily American,”a glorious paper of a distant past that played no minor role in my coming of age.

— “The American | In Italia” was founded by the final editor of the Rome “Daily American,” which folded in 1984 after 38 years.