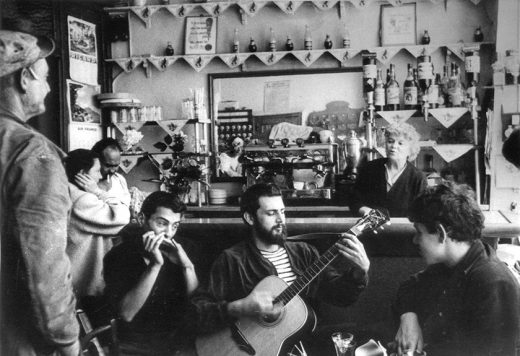 he’d had it with the Beats. All that body odor. All that iffy “poetry.” All the sour swill in dirty apartments. Her husband, no doubt off in some foul living room drinking Red Mountain and reading tortured free verse, had left her to supervise me, a neighbor’s kid, in the job of taking down some shelving.

At that point, I knew nothing about her disillusionment with the avant garde of the cultural world. All I knew was I was going to get $2.25 an hour.

She rested on a sagging sofa reading a magazine and smoking while I unscrewed the brackets and stacked wood in a far corner of the room.

Her right leg was balanced over her left with a worn ballet slipper dangling from the big toe. Her hair was pulled back into a loose knot impaled with a lacquered black chopstick. A worn man’s chambray shirt was unbuttoned just far enough to convey intrigue with the idea of free love offset by the conventionality of her sixties stirrup pants. The overall effect was marred only slightly by the light coating of white cat hair on the black nylon of the stretch fabric. It was far beyond the reach of my imagination to think any of these effects could have anything to do with me. And besides, she was nearing, if not past thirty years old. I was fifteen.

If I’d had the mental equipment to do it, I might have detected a subtle ironic emphasis on the words “hump” and “shaft.”

She flipped a page of “Paris Match,” let smoke from a Balkan Sobranie drift elegantly from her mouth to her nose, then tilted her chin and expelled a sensual jet upwards and to the left.

Silence prevailed, broken only by the rustle of pages turning and muted groans from the ancient springs of the sofa under her haunches.

But then, out of the blue, she addressed me: “Do you know how an engine works, Joe? I’ve never really understood. I know gasoline is burned, but how does that make the car move?”

Exquisite calibration on her part. If she had inquired about my opinion of some Beat poet or other, the conversation could have gone nowhere, because I had never heard of any of them. If she had asked about the Giants pitchers “Sudden Sam” McDowell, or “Butterfly Man” Stu Miller, I would have known what she was talking about, but I also knew she could not be a baseball fan. (Reading “Paris Match”? Please).

But: “Joe, can you explain cars to me?” put the exchange on the primordial footing of me (a Guy) imparting Guy knowledge to a helpless Woman. I was as knowledgeable about gender psychology as a flatworm is about quantum thermodynamics, but some primitive instinct in my adolescent brain was already tweaking to the idea that this explanatory role is in some strange fashion more or less the purpose of guys. Or so guys believe.

“So that’s what the hump is! It’s the drive shaft. I always wondered about that,” she said softly. “And what turns the drive shaft?” If I’d had the mental equipment to do it, I might have detected a subtle ironic emphasis on the words “hump” and “shaft.” But I blithered right along.

“That’s the part I don’t understand.”

“Well basically, the engine of the car has cylinders, hollow tubes drilled into the engine block. The cylinders are closed off at the top end by the valves that let the gas in and the exhaust out. At the other end is the head of the piston, which moves up and down the cylinder. The head is connected to the crankshaft by a connecting rod. When gas and air go into the top of the cylinder, the spark plug ignites the gas, making an explosion that forces the piston back down the shaft, which pushes on the connecting rod, which makes the crankshaft rotate. Basically, there are four strokes of each piston for each little explosion.”

The sense of the question eluded me.

Seeing my puzzlement, she continued.

“The piston goes up and down three times, then there is a little explosion?”

“Oh no, the piston goes up, pushing the exhaust gases out, then down, sucking the gas and air in, then up, compressing the gas air mixture. Then at the top of that stroke, the spark plug ignites the mixture, pushing the piston back down the cylinder. Each up or down counts as a stroke.”

She smiled sadly. “Not in my world, sweetheart. Two thrusts, then an explosion? That counts as two strokes, not four. Not nearly enough.”

“Well, from an engineering standpoint, there wouldn’t be much sense in just having the piston go up and down without…”

I was about to start telling her about two-stroke engines, but she sighed, uncrossed her legs, rose from the sofa and sauntered away.