Comedy in a Minor Key 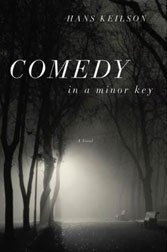 By Hans Keilson, translated from the German by Damion Searls

What “The Diary of Anne Frank” accomplished in several hundred pages of since-immortalized nonfiction, namely to chronicle the goings-on within a Dutch family under Nazi occupation, German-born Dutch writer Keilson compressed into a novel published in Holland the same year, 1947.

While Frank’s account soared into translation and beyond, winning prize after prize, Heilman’s little book took more than a half-a-century to find an English-language translator. More’s the pity, since Keilson gets to the heart of concealment’s hurt faster than Frank. He, like Frank, also went into wartime hiding.

In a German-occupied city, a young Dutch couple named Wim and Marie, both in their twenties, decide to taken in a Jewish perfume salesman named Bram Cohen, who calls himself Nico. They do this without fanfare or special sentiment. Their decency is a matter of course. But as the months pass Nico grows ill. Within a year he’s dead of pneumonia — “He had defended himself from death from without, and then it had carried him off from within.”

The “minor key comedy,” partly ironic, is the disposing of the body, and that Wim and Marie are briefly forced from their home a result of having opening it to another, turning compassion grotesque. Still, there are no conspirators or bad Nazis; no sinister Gestapo agents or potential informants. Instead there’s Marie’s “day-to-day trivialities,” washing, ironing and cooking.

But she watches Nico carefully. While he may fear death-by-arrest or extermination camp, it is benign confinement and the dependence on others that sickens his soul (“cold terror” turns to “blind despair” and “dull hopelessness). Survival debt becomes its own kind of futility, one that the pained and laconic Nico can’t express or endure. He’s infected by the “little thorn that grows invisibly in anyone who lives on the help and the pity of others.”

By the novel’s end, the gap between protected the Jew and his low-keyed redeemers has been narrowed. Wim and Marie have been made forcibly aware of Nico’s life on “the opposite side of a river,” and not even the mundane can ferry them back.