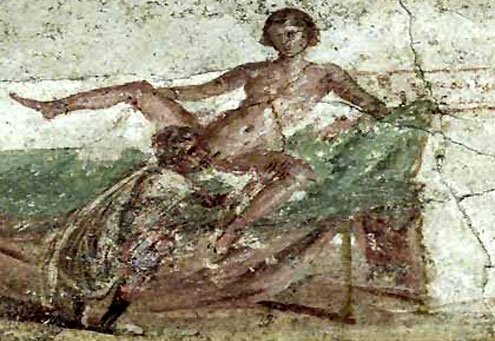 In the largest Pompeii brothel, a man does the honors.
I

magine walking into a friend’s house and finding a marble statue of a goat-man penetrating a female goat in the living room. The lady goat lies on her back against a rock while the goat-man supports himself by kneeling. He pulls her wooly thighs apart and tugs at her beard with his left hand. He seems to whisper sweet nothings into her elliptical ears. They exchange enamored looks; her head takes in the intensity of his stare with a loving tilt. Her hooves rest against his shoulders, and with her tail flapping below, he enters her.

This is in your friend’s living room.

Then, imagine as you’re walking through the dining room you see a painting that covers the entire wall. The painting is of a well-sunned man standing against a sky-blue background. He’s wearing a bronze helmet and a burnt yellow tunic with sea-blue trimming. He lifts the tunic with his left hand and exposes a whale of a phallus. A face of confusing disappointment hides behind a scraggly beard.

This is on your friend’s dining room wall.

Next, you make your way into the kitchen. Hanging from the cabinets is what looks like an indoor wind chime in the shape of a stout man in light armor and a tunic. Emerging from beneath his tunic is his penis. It’s shaped like a tiger and it’s attacking him. He’s trying to stab his member with a knife and protect himself from it with a little shield. Four bells dangle below this epic castration battle.

This is in your friend’s kitchen.

Kinky, no? Yeah, your friend is a freak.

But, let’s mix things up a bit. Imagine that instead of finding these phallic images and statues in your friend’s house, you find them in an ancient town on the Tyrrhenian sea that had been covered by dirt and volcanic ash for almost two thousand years.

Then imagine Pompeii or Herculaneum. Both were destroyed when Vesuvius erupted in 79 AD, belching brimstone and fire over the Bay of Naples and into surrounding towns. The eruption killed thousands. Many were encased in burning ash, their bodies soaked in rivers of mud. Their final moments were frozen under pumice and liquid earth.

Before the catastrophic event, Pompeii had been a prosperous Roman town of modest size. Glitzy Herculaneum was a resort town for the Romans. Both tended toward the lascivious.

But if the Romans lived amid sculptures of fornicating goats and chimes of hostile penises, does this mean they were truly kinky?

Well, let’s take a house tour — which you can also take at the Naples Archeological Museum.

The statue of the goat-man with the female goat is Pan, a god of shepherds, fornication and wooden whistles. He was the offspring of Hermes and a goat and was born with hooves and horns. He spent most of his time in the woods playing a flute he called a syrinx. When he wasn’t frolicking in the woods, he was chasing nymphs, goats and little boys. Through these recreational exploits he came to represent fertility. His reputation put him on the bad side of prudish Christians during Roman times. He eventually became their symbol of lasciviousness, and ultimately the devil.

The half naked man with the column hanging between his legs in the dining room wall is Priapus, a god of fertility in Greek and Roman mythology. While he was still in Aphrodite’s womb, he was cursed; every part of his body grew to gross exaggeration. His ears flopped, his belly jiggled, his jaw protruded, his extremities bulged, and his ridiculous penis swung mightily, perpetually erect, between his legs.

Ugly, he was shunned by his mother and exiled into the wilderness. His fertile powers manifested themselves in the wilderness. All burst into life when he was around. Flowers bloomed, trees shot up from the ground, and chipmunks got down and dirty. Unlike Pan, Priapus was revered by Christians. Despite the Roman Church’s best efforts to cancel paganism, Priapus remained dear to believers. They baked phallic-shaped loafs of bread in his honor. He was the last pagan god to be erased from the Christian mind.

The statue of the man fighting his own penis is a Roman lucky charm. The Latin word for penis, fascinum, has etymological roots in fas, meaning good luck. Many Romans believed if they decorated their homes with phallic symbols that the gods would keep them safe.

For the Romans, a penis wasn’t just a penis, a half-man half-goat having sex with a female goat wasn’t bestiality, and marauding tiger-penises weren’t weird. Every shocking image, every kinky statue, every disturbing talisman represented an aspect of Pagan superstition. They brought luck with sex, with money or with life; most Romans considered these objects and images as auguries.

But images of luck and sex tended to blend indistinguishably near brothels, which were abundant in Pompei. For instance, direction arrows to the nearest brothel were in the shape of a penis. If you saw a penis image embedded in the walkway, you were a literal step closer to Roman ecstasy. The arrows were maps.

The brothels themselves looked a bit like fast food restaurants. Paintings of “house specialties” adorned doorways above “play” rooms. Very much like ordering off a picture menu, you found something you liked and simply stood outside the room waiting for an employee to take your order.

While waiting for a “waitress,” you could ponder the regularly updated pornographic graffiti on the walls. These were mostly report cards indicating who the client had been, what acts had been performed, how much it cost (usually measured in gold coins, aureus, or As), and tidbits such as “Panta has a really nice ass.” Men also helped out, as in: “Maritimus licks your vulva for 4 As. He is ready to serve virgins as well.”

Fun for the family!

So, if you’re feeling particularly pagan-like or simply want to pick up a statue of a goat-man penetrating a female goat for your living room, visit Naples. One thing’s certain: If your wife finds goat copulation distasteful and demands answers, you can tell the truth: “Honey, this is not what it looks like.”