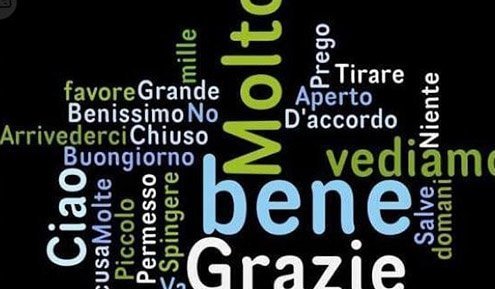 was 35 when I set out to learn Italian. I was spurred by my first trip to Italy. Flying from New York City to Rome, I landed in a place so magical, I instantly felt transformed.

Romantics fall hard for Italy and after 10 days I was smitten. I wanted to stay. I returned to New York broken-hearted. I walked around dejected. My friends grew tired of me talking about Rome, the history, the beauty. They just didn’t understand, I thought.

As a consolation, I decided to learn the language. Surely being with other Italophiles would raise my spirits. It would be fun and easy. Without hesitation, I signed up for classes at Scuola Italiana.

Classes were held at night at Our Lady of Pompeii Catholic School. In a room meant for fourth graders, I found a desk along with 10 others and sat with eager attention. The teacher walked in smiling, greeting us in Italian and gesturing wildly. I couldn’t make out what she said but I wasn’t concerned.

Then she spoke in English.

“Welcome to your first Italian lesson. I’m excited to meet all of you. My name is Corina. Our philosophy is to give you an immersive Italian experience. We find it’s the best way to learn the language and experience the culture. So, from here on, we will speak only Italian.”

Then, the English stopped.

She continued in Italian, gesturing to the lesson book, the blackboard and to fellow students. I was intrigued at first, after which my mind went blank. Then it got worse. I began to panic.

As the hour continued, I felt lightheaded and my throat went dry. My chest grew hot and sweat ran down my arms. My adult self shrank. I was a beginner and I felt small, inadequate and incapable.

In an effort to calm myself, I tried to recall hearing the language on the streets around Piazza del Popolo and the Castel Sant’Angelo. But rather than re-experiencing Italy, I was stuck on another planet. All I could think was, “What have I done? This will be a nightmare.”

Come ti chiami? Corina prompted me. I should have been able to guess what she was asking but I’d entered the dense fog of my own discomfort. Come ti chiami? she repeated.

It was then that my voice closed down. I couldn’t speak. A thicket formed in my throat and stayed there. Thankfully, she moved on to the next student. I was relieved.

It went on like this through the night. I dreaded my turn.

At the end of class, Corina took me aside.

“Why don’t you speak in class? You’ll never learn Italian if you don’t speak.”

I looked at her blankly and then admitted the obvious.

“I’m terrified. I think I need to drop out. I’m miserable.”

“But you can’t drop out now. We’ve just started. It will get better.”

There was a long silence between us. I knew she was trying her best to encourage me, but it just wasn’t working.

Corina looked at me incredulously. Not speak in class? It makes no sense. But she gave in.

I’m sure she thought I’d grow comfortable over time. I agreed to simply see it through.

I made it through the eight-week course but never did speak. Corina passed over me in class while the other students learned pronouns and conjugated verbs. For me, just living though my discomfort was my accomplishment. I left with a huge sigh of relief.

It was my folly to think that because I was an adult learning a new language would be instant and easy. Mastery is process and pitfalls and incremental progress. I understand that now.

Years later, I still feel drawn to the country. My love has not diminished. But while getting to Italy requires little more than a plane ride, learning another country’s language is something else again, something it took a memorably painful eight weeks to fully understand.