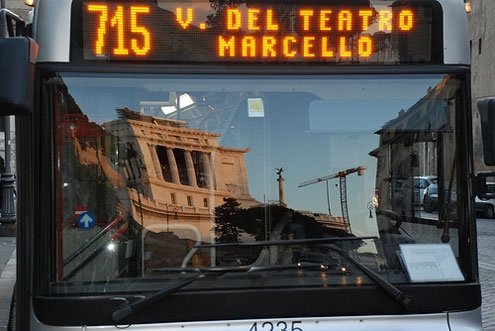 The morning grind is a dirty one.
I

t’s springtime in Rome. Temperatures are rising. The mood is cheerier. There’s something in the air. Unfortunately, the “something” is people. They smell.

Let me explain. In Rome’s chillier months people tend to sweat less. Layers of clothing shield the not-so-cheering aroma of the city masses from the outside world, and from you.

When spring rolls around off come the layers. As a daily commuter, I can tell you that there’s nothing worse than getting on a bus at the crack of dawn to be rudely awoken by body odor (it’s a lot more powerful than coffee).

Yes, I know, not everyone in Rome showers before heading off to work. I’m obsessed with showers. Twice a day for me.

I also know this take on personal hygiene is a “Euro” thing and I’m American. We all have our differences. Plumbing has never mattered as much here as in scrub-brush America. I get it.

What I don’t get is not checking up on yourself before walking out the door. Okay, so you didn’t have time to shower. So how about lotion, deodorant, body spray or perfume, anything to help out the suffering masses? The key is to appear to be washed even if you’re not.

My philosophy is definitely the minority view. Nor do I think the bus company would take to my idea of putting air fresheners in city transport. Think how much happier people would be! All those lovely scents! Lavender, ocean spray, Aloe Vera, rose petals!

That, for Italians, would be a leap into the 30th century. It would put them way ahead of their European counterparts (trust me that this is not just a Rome problem).

Then there’s the window issue. Now that it’s warmer, why keep all the bus windows closed? Answer: Someone might get hit with a colpo d’aria, otherwise called a breeze. That sinister event would inevitably result in a terrible illness (known as the sniffles) that would keep the breeze-sufferer bedridden for 10 days.

The colpo d’aria concept doesn’t exist in the United States. I’d like to see an Italian try explaining the need to keep bus windows closed in Miami, home to hurricanes and tropical storms (then again, most Italians were terrified by air conditioning until 20 years ago. Some still are.)

But back to the window thing. Here’s what I say: It’s boiling inside the bus. If you’re afraid of killer breezes, bring a scarf. And while you’re at it, put on a ski-cap. Just please just open that window.