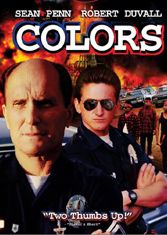 Put Dennis Hopper, Robert Duvall, and Sean Penn in a stirrer and you get this. Hopper directs as Duvall and Penn (an early role) play cops in a cat-and-mouse game with gangs in the L.A. projects. An obvious gun-control flick — among the first efforts to recognize “new” gang warfare — it sometimes gets lost in subplots. But watching Penn (then 27), as well as young Don Cheadle and Damon Wayans makes it worthwhile. Hopper’s direction never resorts to cheap tricks and portrays urban gangs as cruel guilds of honor with rough but real people.