Colorless Tsukuru Tazaki and His Years of Pilgrimage 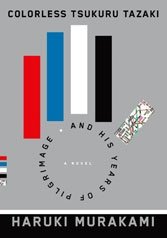 By 2014 Haruki Murakami, translated from the Japanese by Philip Gabriel

Haruki Murakami has an uncanny ability to make the tedious beautiful and vice versa. Here, the beauty is the simple storytelling, the work of a well-rehearsed weaver. The tedium arises instead from the theme, yet another rehashing of Murakami’s two-decade-old affinity for self-absorption, melancholy men and mysteriously miserable women, and with it a low-keyed if often vaguely ominous supernatural undercurrent. “Norwegian Wood,” his 1987 breakthrough, tracked a rueful man’s emotional peregrinations toward and away from the two women he loved, one strong, one fragile. The narrator, in his 30s, exists to ponder the meaning of love, sex, friendship and loss.

“Colorless” is his “Norwegian Wood” for the 21st-century, with only a few shadings altered. Tazaki Tsukuru is introduced as an awkward 20-year-old of limited self-esteem (“I have no personality, no brilliant color…”) whose life has come apart because his four best friends — a circle of five, two men, two women — have cut off all ties with him for no discernible reasons. Bewildered, scarred, and sexually confused (since, predictably, he had feelings for both young women), Tazaki resigns himself to their cryptic verdict — assuming they must reflect his shortcomings — and drifts forward, becoming a builder of railway stations and leading a minimalist life. Until he meets Sara, a strong-willed businesswoman and potential life partner who urges the self-styled “empty vessel” to be all that he can be. That means digging into the past and shedding emotional baggage. The aim is self-discovery, however murky (“Our lives are like complex musical scores,” muses Tazaki).

Like previous forlorn Murakami males (“…no place he had to go to, no place to come back to…”), Tazaki is mesmerized by beautiful but flawed women (ever unattainable) while at times flush with homoerotic sensations (suppressed sexuality is a constant theme). At home in a kind of sentimental narcosis, his day-to-day life is composed of dreams, flashbacks, and, later, trips to in search of the friends who once cut him off (“Why must the workings of people’s lives be so convoluted?”)

No one is better than Murakami at delivering such self-involved, questing tone poems, perhaps newly pertinent in societies intrigued by the idea of “victims” and their Dorian Gray torments. If only the hope-springs-eternal poetry didn’t by now ring banal, a vestige of an idea an author fell in love with early in his career.