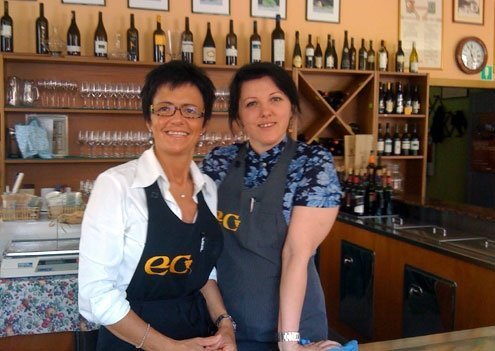 All smiles in the Cormons enoteca. Photo by Eleanor Shannon.
A

uthenticity is a beloved concept to Dario Raccaro. “I make wine that is true to the land and true to the grape,” Raccaro said as he poured me a glass of his Friuliano white  from the Collio, a rich wine region in Italy’s northern Friuli-Venezia Giulia region. “It’s authentic. I use 100 percent Friuliano grapes.”

Though unrelated to sauvignon blanc, the Friuliano grape is also known as Sauvignonasse or Sauvignon Vert. Its original name, Tocai Friuliano, was set aside to prevent confusion with a famous Hungarian botrytized (or mold-covered) wine called Tokaij, which is made from altogether different grape varieties.

In the glass, Raccaro’s wine had the color of deep straw yellow. Crisp and dry with a hint of green apple, the finish tasted of almonds. “The grape naturally produces a wine with elegant structure,” added Raccaro. “We don’t need to use wood at all [i.e. age the wine in barrels or barriques].”

“I don’t compromise,” he told me, giving me a taste of a Friuliano cru that hails from a special vineyard known as Vigna del Rolat. “I let it be what it is: an expression of local grapes grown in these vineyards. Even the same varieties will taste different from year to year.”

Raccaro’s bluntness might suggest that his contadino-style wine isn’t much appreciated outside its Collio birthplace. Nothing could be further from the truth. In 2008, his Collio Friuliano 2006 won Italy’s “Gambero Rosso” prize as the country’s best white wine. Year after year it racks up Gambero Rosso’s tre bicchieri (“three glasses”) ratings — highest on the food and wine guide’s scale. Raccaro produces only 25,000 bottles of wine annually, which usually sell out within months.

He’s not alone among Collio’s mainstays.

These rugged Collio guys produce some of Italy’s very best terroir whites, which they offer at reasonable prices (€10 to €15). The wines are naturally structured and pair well with white meats, shellfish, pork, whether prepared simply or with heavier sauces. The classic Friuliano pairing is prosciutto. In addition to native whites, the Collio is also famous for international varieties: Pinot Bianco, Pinot Grigio, Sauvignon Blanc and Chardonnay (generally made without wood).

I later met Elizabeth Blasig, a tall and elegant blonde who surprisingly is doing much the same thing in Friuli Isonzo, the DOC region next door to the Collio. I particularly liked her Malvasia Istriana and Chardonnay. The Tenuta Blasig in Ronchi dei Legionari has been in the family for generations, but she’s the first to bottle the wine (instead of selling it in bulk or demijohns). She’s developing a serious winemaking operation.

The Enoteca di Cormòns in the village of Cormòns is the hub of the tiny DOC Collio wine region. It is owned and operated by 34 soci (shareholders), all but one a Collio vintner.

One Saturday morning in late spring I stopped by to arrange tasting appointments. Two women behind an L-shaped counter sprang into efficient action, showing me maps, explaining routes and calling producers up. It all felt more German than Italian.

Not so surprising given that the Collio sits on the border between Italy and Slovenia, north hideous scars of World War I trench warfare are still evident, though incongruous alongside soft, green, rolling hillsides.

While some wine regions have been marred by development, the Collio remains rural and pristine. Vineyards are clustered in a compact area and easy to recognize since signs are uniform (again, far more German then Italian).

After a morning of tastings, I returned to Cormòns and the enoteca at midday for a light lunch on the terrace: a fresh insalata mista, a plate of prosciutto, and a glass of Friuliano. An adjacent table contained about a third of the enoteca‘s vintners, sharing wine, lunch and jolly conversation. They invited me over an introduced me to my afternoon tasting hosts.

Despite the rugged individuality associated with this corner of Italy, there’s evident esprit de corps and common sense of pride and mission. Vintners compare notes to hone their Collio blends. They’ve also adopted a new bottle shape to give the wine greater brand recognition.

Another Collio institution is La Subida, a characteristic relais tucked among the local vineyards. It has an excellent trattoria (La Trattoria del Cacciatore) and osteria (Osteria de la Subida). It’s also booking point for Collio in Vespa, a locally-sponsored program that rents yellow Vespas for touring visitors. When to go? Fall is the best time. You might find me there — again.