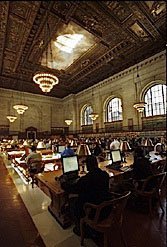 ince I arrived in Italy, the number of homegrown things I can’t do without, replace or substitute has shrunk. Fresh cranberries actually appear in season and Ikea’s lingonberry jam can pass as cranberry jelly. Skype has made calling home cheap. Amazon keeps my bookshelf (too) filled.

But one thing I do miss and it isn’t “coming soon” is a real American public library. I mean the kind where you can browse magazines and take home books you won’t buy; one with a polite and curious staff that tries answering your questions, suggests books, and let your children take out whatever they want.

Explain this to an Italian and they get huffy. Why read a book you don’t to want to own? Unfamiliar hands might have soiled it. Never mind reminding them that lending out books — and DVDs, CDs, magazines, sheet music and children’s puzzles — is only part of a library’s social and cultural role. It shouldn’t be that hard, actually, because Italy has some great libraries — but academic ones.

The connection between public libraries and public life in America is about as clear to an Italian as the relationship between two sandy weeks spent obscenely close to the bared flesh of strangers and an American road trip. They are different visions of civic participation; different visions of vacations.

American libraries do an immense amount of civic good. They organize readings, launch authors, and set up conferences. The Inter-library Loan program, for example, offers global library access. The library has summer reading programs for children.

You can track investments on professional-caliber databases that are too expensive for an individual to buy. Several high-tech success stories along Boston’s Route 128 acknowledge the resources of the Lexington, Massachusetts library. Libraries offer meeting rooms for anyone: high-school study groups, community groups, political activists, and businessmen. Younger students can hang out (quietly) at the libe. Loners, the homeless, and eccentrics have a warm place to read the paper or document their obsessions (a harmless coffin enthuasist wandered my town’s library). Banks of computer terminals bring the Web — and professional help using it — to the elderly and poor who would otherwise be computer illiterate. Anybody can go, and it’s for free (minus local taxes).

Libraries reveal much about nations’ characters and values. Paris’ old Bibliothèque Nationale began as a royal library. Ranks of marble busts and leather-topped desks with green glass lamps fill its vaulted reading room. Heavy-hitters of intellectual and political history were patrons. The catalogues were huge volumes. Using a complicated system of color-coded call slips, energetic young clerks got books (you can’t check them out) from the stacks to your desk.

The new Bibliothèque Nationale is deliberately intimidating and conceptual — a legacy of François Mitterand’s sense of grandeur. Getting accreditation is akin to obtaining a U.S. visa. The computer-based catalogue demonstrates the French faith in centrally organized bureaucrats and directives. The underground reading rooms are located off disorienting corridors that connect the structure’s four towers. The towers — for Law, Numbers, Time and Letters — are monuments to French rationalism.

But just how rational is it to house books, heavy and in no need of light, in high-rise towers, while the patrons, who weigh less and like light, are stuck underground?

Yes, the BN is an academic library and a hotbed of thought. Still, it’s definitely unamerican. I can wander the Dartmouth College library at will and check out books for a yearly fee. American public and research libraries usually have open stacks. Most cataloguing systems are universal and group books by subject. A call number can locate the book you want in virtually any collection. Inscrutable European catalogues, based on size or entry date, are made for specialists; stacks are closed. Open ones are pure serendipity.

Book searches in America, by contrast, usually offer fruitful detours through related (and unrelated) categories. Anything can turn up. In a European library, you only get only what you know you’re looking for.

In fairness I should say that many small towns in France have public libraries along American lines. Milan’s Sormani is a respectable and readily accessible research library.

But only in America do the popular and academic intermingle so easily. What an incredible sign of respect for the general public! What could be more democratic than free, open institutions that make no qualitative or hierarchical distinctions among branches of knowledge, kinds of literature or background of patrons?

I know, America has problems. We’re narrow-minded and Philistine. Our Empire, such as it was, crumbles and our global domination — asked for or not — wobbles. India and China breathe down our neck.

If you want to feel better about this, you know where to go. So long as we use our taxes to support ideas and associations that have no intrinsic or instrumental value other than their own existence, hope springs eternal.