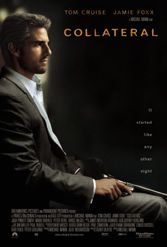 As with all Michael Mann movies, this one is handsome to look at. Armani-clad Tom Cruise, an accomplished assassin named Vincent, “hijacks” Max’s (Jamie Foxx) taxi cab in Los Angeles and puts him through the paces. Cruise, cool and lurid, needs Foxx’s cooperation to get the last man on his hit list. Just as Mann begins forging an appealing bond between the men — opposites attract — the film veers awkwardly toward a mayhem-charged climax: subway trains and guns. It’s as if Mann gives up on his characters and turns instead to Hollywood infant formula. Pity.