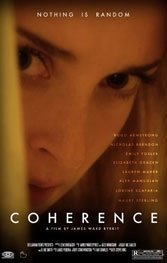 In writer-director James Ward Bykrit’s stimulating and claustrophobic thriller, a group of eight friends gather for dinner on the night a large comet skirts along the earth’s atmosphere. First, a mobile phone shatters. Then, gradually, conversation turns edgy and feral, finally fraying altogether. Soon, power goes out. A foray to another home turns up a box of images — of the dinner guests in identical poses.

By playing on doubles, Bykrit has main two goals: to poke at the fragility of individual reality and expose how people under pressure turn to unequal doses of lucidity, irrationality, and self-pity, all of which are in constant motion if not on a collision course. Minor sentimental disagreements among the diners suddenly turn large and threatening; seemingly impossible coincidences induce fear and bickering; the supernatural and paranoia become kissing cousins. Trust collapses.

This is smart, pressure-cooker of a mood piece that works little wonders with group dynamics. It sets up a variety of realities involving the same characters and lets quantum havoc loose on people who are far to fragile and fraught to handle the consequences. “Worse things could happen at a dinner party,” says one guest. Hardly.

Had playwright Edward Albee decided to take “Who’s Afraid of Viginia Woolf?” into the realm of fantasy he might well have entered this house of comet-dusted horrors.