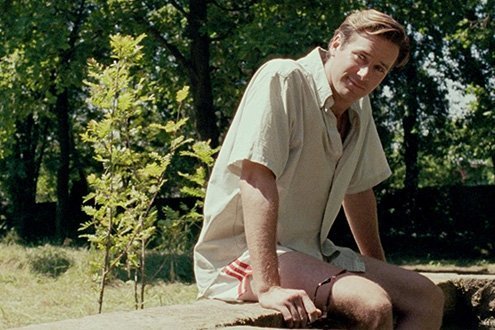 Arnie Hammer as Oliver in "Call Me By Your Name," from a James Ivory screenplay.
I

t could have been titled “Summer of ’83,” after the film it most resembles, “Summer of ’42,” the poignant, sensuous coming-of-age vacation classic. But “Call Me by Your Name”— a private, coded way of expressing the oneness of lovers — has the virtue of suggesting this film’s complexity, subtlety, and intensity.

Set in northeast Italy, “Call Me by Your Name” unveils the relationship between 17-year-old Elio (Timothée Chalamet), and thirtyish Oliver (Armie Hammer), a graduate student who has come to live in the family summer home while working with Elio’s father (Michael Stuhlbarg), a professor of Greco-Roman antiquities. Age is not their only difference. Elio is short, teen-skinny, playful, and angular; Oliver is tall, stolid, and, next to Elio, enormous and awkward. Moreover, Elio’s world is elite, cosmopolitan and multi-lingual; Oliver is the brash, over-confident American, whose favorite expression is “later” (he sounds eerily like Don Draper of TV’s “Mad Men”). For all his sophistication, Elio hasn’t yet abandoned life as a teenager. He has a girlfriend, is comfortable in his youth culture, and goes everywhere on a bicycle.

Elio and Oliver are dissimilar, too, because this is Elio’s story, not Oliver’s, a story line accentuated by director Luca Guadagnino (“I Am Love,” 2009) in the way the protagonists are filmed. Guadagnino avoids the shot/reverse shot sequences that would suggest equality, and favors Elio with close-ups while showing Oliver at a distance.

Despite their age difference, Elio and Oliver both are smart, educated, cultured secular Jews. They share an appreciation for and knowledge of music. In one of the film’s most evocative and nuanced scenes of courtship, Elio, a precocious pianist, and Oliver test each other and celebrate a developing understanding while Elio plays cryptic variations on a Bach aria they both know well.

Things move forward from there, as Elio and Oliver discuss books, play in the pool, and go bike-riding, but the progress is hardly linear. While there’s desire on both sides, there’s also reticence. Oliver risks violating his internship with Elio’s father; Elio is in forbidden territory, especially in 1983. The confluence of these two arcs — Oliver’s reluctance, Elio’s cautious awakening to a new kind of desire — is one source of the film’s intensity and its deliberate pace.

Another is James Ivory’s erudite, spare, and character-appropriate screenplay, adapted from the novel by André Aciman. The screenplay has been widely and rightly praised, and is nominated for an Academy Award. Even so, two scenes don’t work, both involving Elio’s parents. In one, Elio’s mother (Amira Casar) approaches her husband, seated in a chair, and Elio, who appears to be curled up at his feet. She reads a German fairy tale, whose metaphoric message is cloyingly relevant to Elio’s situation.

The second inapt scene intrudes later, after Oliver and Elio have consummated their relationship and Oliver has departed. Elio’s father, known by his last name, Perlman, invites his son into his dark study and begins talking. The scene now has its own name — the “monologue.” Full-page advertisements in the New York Times tout the screenplay, quoting multiple lines from the monologue, as if it were the key to Ivory’s adaptation and the film’s success.

One justification for this father-son piece is that Elio desperately needs his father’s understanding and approval, to be welcomed back into the bosom of his family. There is a hint of the latter in the film’s final shots, when a tormented Elio turns from the fireplace and glances back at domestic activity behind him. But even if Elio has such needs, he’s far too mature, independent, and thoughtful to be forced into silence — by Ivory’s screenplay — at this critical moment in his life.

Call Me by Your Name ★★★1/2  Directed by Luca Guadagnino. With Timothée Chalamet, Armie Hammer, Michael Stuhlbarg and Amira Casar.