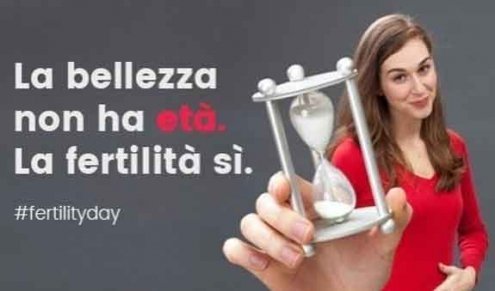 t’s no secret that Italians see themselves, and are seen by others, as among the world’s great lovers. But the average birthrate among Italian women in 2015 was a paltry 1.35 children, well below the global average of 2.45. In fact, the Italian national birthrate has been low for some time now, suggesting something is, or rather is not, going on. Could it be that sex is out of fashion in Italy?

Observers of the trend have pointed to Italy’s lagging economy as the cause. Unemployment among 20-to-35 year olds has hovered above 40 percent since 2009. Many young couples just don’t have the financial stability necessary to start a family.

The campaign logo showed two sperm swimming toward a heart, giving the whole idea a surreal dimension. Correct me if I’m wrong, but aren’t spermatozoa supposed to swim toward an egg in the fallopian tube, not the heart?

In any event, Fertility Day was intended get couples (women in particular) to set aside contraceptives and family planning. It also helped remind Italians that sex is for pregnancy, not fun. The Vatican couldn’t have done it any better. Then again, an organization composed of virgins and celibates may not be best suited to give sexual advice.

Not surprisingly, the ministry saw women as the solution to the problem. The campaign included 12 promotional images, which some saw as a return to Fascist-style propaganda of the 1930s, when part of a woman’s social duty was bearing children. The most controversial poster showed a woman holding an hourglass with a caption that read, La bellezza non ha età. La fertilità sì.. (“Beauty is ageless. Fertility isn’t.”)

Many women took to social media to insist neither church nor state had any business telling them what to do. Some saw Fertility Day as vulgar way of reminding them their place was in the home, preferably pregnant. Never mind that some Italian employers require women to sign an undated letter of resignation to justify their firing in the event they become pregnant — a practice known as dimissioni in bianco (roughly, “carte blanche resignation”).

For the LGBT community, Fertility Day was a thinly disguised excuse for what amounted to a state-sponsored Straight Pride Day. If only that day weren’t already celebrated 365 days a year.

Joking aside, heterosexual couples that want a child but can’t conceive face real heartache. A married couple I know recently presented reams of paperwork to enroll in an assisted fertility program. She faces the rollercoaster of hormonal therapy while he’ll have to deal with humiliation of being reduced to little more than a source of sperm. Relationship stress doesn’t begin to describe what they’re in for.

Yet while we’re quick to recognize and sympathize with childless young heterosexual couples, that sympathy rarely extends to LGBT people. They’re somehow immune to similar anguish and longing.

LGBT couples can’t even do that. Though Italy recently legalized civil unions for same sex couples, the law conspicuously barred their ability to adopt — no single parents and same-sex parent adoption; no same-sex stepchild adoption; no using a surrogate womb. That essentially cuts out the LGBT community from childrearing. The ban helps keep a lid on our queer little genes and flamboyant lifestyle to ensure no child grows up to be LGBT.

The good news is that most LGBT people were born to and raised by heterosexual parents. To replenish itself, the LGBT population depends almost entirely on heterosexuals having as much reproductive sex as possible.

So if our fertile heterosexual brothers and sisters require a special day and government sponsorship to have sex (in a reproductively correct way), I won’t spoil the party. With Fertility Day over, it’s time for heteros to assume the missionary position and get to work. LGBT people can show their support by having as much “sympathetic sex” as possible.

But a word of thanks is ultimately due to those fertile heterosexuals who continue to give us so many little LGBT’s. It’s all part of the gospel according to Lorenzin, which makes it an Italian’s patriotic duty to go out and get properly fucked.