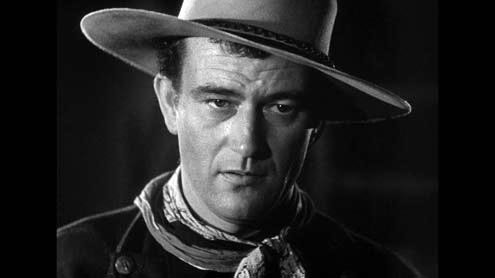 hat more could you ask for than a wisecracking John Wayne before The Duke became a victim of his larger-than-life image? When John Ford cast him as “The Ringo Kid” in the hotheaded 1939 Western “Stagecoach” he was just 32 and a marginal player in the envy-laden prewar star system.

The narrative cover story is arrow-straight. A stagecoach heads West into Geronimo-land with everyone on edge. As anxiety rises, so does bickering, bringing class, status and political disposition into play. For Ford, characters are the sum of their quips. An inappropriate one any’s character’s mouth and you know he won’t last the movie.

Laid back Ringo, née Henry, is the outsider and the heroically stabilizing force, American fortitude unburdened by exceptionalist trimmings. His lines stamp ethics on the deepening dilemma: “Well, there are some things a man just can’t run away from.” The things men do run from in addition to 1930s injuns are the savages within, including, greed, treachery, cowardice, and even the love of a good woman (Clare Trevor as Dallas). Heathens are the majority tribe. Ford’s is a frontier morality tale that admits humanity and prejudice and doesn’t shy from melancholy.

Watch for Berton Churchill, who plays banker Henry Gatewood and pipes up with a memorable post-Hoover, pro-FDR zinger, using irony as a winch. “I have a slogan that should be blazoned on every newspaper in this country,” roars Gatewood, “America for the Americans! The government must not interfere with business! Reduce taxes! Our national debt is something shocking. Over one billion dollars a year! What this country needs is a businessman for president!” Gatewood is an embezzler of course.

Here’s the monarch fueled by 20th-century adrenaline and hammered into an interwar setting. McKellen is the cigarette-smoking Shakespearian zealot, but his landscape is a 1930s faux-Fascist England where Richard’s House of York and the Lancasters are pitted in civil war. Shakespeare’s expansiveness plays to any period, so do arrogance and pretense. But whether Loncraine does the bard a favor by fast-forwarding him is open to interpretation among those who prefer their Shakespeare less literally able bodied. The soliloquies to which rich Richard is glued seem better suited to a pre-mechanized time.

Indisputable is McKellen’s rousting, passionate performance as throne-or-bust Richard, a tic-afflicted king who revels in tanks, planes and civilian annihilation. “I can smile, and murder while I smile,” sayeth Richard, all the more reason for McKellen to have picked Oswald Mosely 30s for his loudmouthed adaptation. Here’s Shakespeare presaging World War II with wit to spare (a few years before Julie Taymor did much the same with Anthony Hopkins in “Titus.”)

Speaking of wit (and slyness), Paul Newman’s the whole ticket (and then some) in the understated 1994 “Nobody’s Fool,” a much-ado-about-nothing tale about a scuffling 60-year-old who’s finally forced to do some moral reckoning.

When Sully’s college professor son Peter tumbles back into his life (he’s getting a divorce), Sully must do what he least likes to: behave like an adult, or learn to. That process is Newman’s to own. Writer Richard Russo (“Empire Falls”) is a sultan of village patois and director Robert Benton makes all the little moments count — Sully’s relationship with landlady Beryl, the venerable Jessica Tandy, is particularly poignant. Finally, though, it’s all about ole’ blue eyes. Newman admirers shouldn’t do yet another example of the late actor’s ageless charm. Watch for young Philip Seymour Hoffman as Officer Raymer.