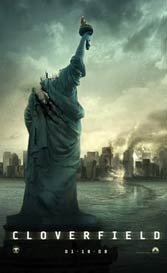 How to make a 50s-style Japanese monster movie for the OMG-cum-Facebook crowd? Backwards. Go heavy on the camcorder (“Blair Witch Project” ground) and crank up the mobile phones. Insert time coding and splice cleverly. Make people think they’re voyeurs at someone’s twenty-something good bye bash; he’s headed for — where else — Japan; beer and laughs; profligate “awesome” and “cool”; oh, and did she really have sex with him?

But you’re on a short leash. How so? The film opens with a choppy Defense Department disclaimer that the footage ahead regards the “Cloverfield” incident and was recovered “in the area formerly known as Central Park.” There’s no more cinematically ominous word than formerly.

Back to the party prattle. “Can we not do this here”… “Dude”… then… 30 minutes in, wham. Manhattan darkens. The reality show party scrambles. Lady Liberty’s head flies loose and skitters as screaming onlookers snap mobile phone shots, a sublime conceit. Cometh the monster(s). “What was that thing?” What indeed, but by then New York’s half gone. The video turns jagged. The exodus begins. “People will need to see this.” “This is important.” So the video keeps rolling. The urban apocalypse (or “serious shit”) needs scribes. (Note Nokia ad placement in the subway.)

Not a narrative movie per se — there’s no plot or character development — director Matt Reeves (with J.J. Abrams producing) pays jumpy homage to mayhem, hysteria and heights, in phobia-driven order. The irony takes plenty of jabs at breaking news, the obsession to document and a “we can totally do this” spirit that’s often comical (“What time do the choppers take off?” “0600.” “What times is that?” “Six o’clock” “Oh yeah, I knew that.”)

But make no mistake. Though Godzilla and its lethal leprechaun offspring are often incidental, the minutes pass gruesomely. The camcorder blur unsettles the comfort of disbelief. Myth-making and romancing provide no refuge. Absurd or hypnotic, the menace is unforgiving. And you’ve been told how it ends. So much for famous last words. (For those interested in Abrams’ inspiration, check out the first 15 minutes of “X-Cops,” episode 12 in the seventh season of the TV series “The X Files.”)