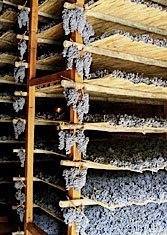 hen the winemaker Ettore Falvo first tasted his father-in-law’s vin santo, he was astounded. Aged 12 years, it was dark and thick as tamarind syrup with a perfume so intense it lasted a week in an empty glass. Irene Virbila, The New York Times, October 1, 1989

When I read this excerpt ages ago I wasn’t familiar with vin santo as made by artisans. Instead, I’d just begun exploring French sauternes, and while Chateau D’Yquem attracted me, Virbila’s report on Italian sweet wines enticed me. I wanted to know more about the wine and its producer.

Last month, driving between Cortona and Montepulciano, I stumbled by chance on Le Capezzine, one of four principal Avignonesi vineyards and home to Falvo’s saintly dessert wine (Avignonesi is renowned for producing Vino Nobile di Montepulciano, a great red wine).

Lacking the courage to drop in unannounced — that would be like knocking on Fort Knox’s door — I tracked down its number on my cell phone. I couldn’t resist being so close to their vinsantaia, the attic space reserved for aging rare vin santo.

Using my best wine columnist voice (which, by the way, sounds remarkably similar to my everyday voice), I took a deep breath and asked if I might meet with someone at the vineyard on such short notice. I was put on hold for an excruciating minute or two and finally told, “yes,” they were very busy, but someone would see me if I came back at 3 p.m.

Returning at the appropriate hour, I expected to be met by an overworked employee. Instead, there stood Alberto Falvo, Ettore’s brother. Together, they run the family’s estate. He shook my hand warmly, and with polished Tuscan charm invited me into their 16th-century salon.

Alberto’s topics ranged far and wide. He told me about Avignonesi’s planting strategies and varietals; he explained Vino Nobile and Montepulciano’s place in Italian winemaking. In 1988, the winery entered into a wine partnership known discreetly as 50 & 50. Like Opus One, the brainchild of Robert Mondavi and Baron Phillipe de Rothschild, the Falvos’ wine blended grapes grown in two vineyards, merlot from the Avignonesi estates and sangiovese from Capannelle.

Listening intently, I remained focused on their Occhio di Pernice, their unusual vin santo. Aging vin santo is a slow and costly affair that requires substantial investment of both time and space. In that way it’s like Modena’s balsamic vinegar. For years, Alberto told me, winemakers handcrafted vin santo solely for family and friends. In fact, Avignonesi didn’t begin producing it commercially until 1974.

To bring it to the public, Avignonesi needs about 100 kilos of sangiovese grapes to yield a mere four litres of thick amber wine. Using a century-old recipe, they currently produce only 1,000 bottles a year. Aging potential and rarity give vin santo a high appreciation value.

Avignonesi harvests pugnolo gentile (sangiovese grapes) for Occhio di Pernice before they’re overly ripe. To aid in the drying process, the workers pick sparse bunches best suited for the air circulation in the appassitoio or drying room. Once picked, the grapes are refrigerated and moved carefully to avoid bruising that might invite rot. The fruit is then spread out on reed mats and left to air-dry until late April when the remaining juice is pressed and racked. This thickened syrup is then mixed with the madre, the magical lees from the previous batch, and the key to the next decade’s bottles. Both are then sealed tightly in 50-liter caratelli and left undisturbed to work their magic for a decade in the vinsantaia.

Starting with the 1999 vintage, Avignonesi has said it will increase the wine’s maturation and aging period to twelve years. The ’99 bottles won’t appear until 2012.

My own impression? Occhio di Pernice is mesmerizing, a honeyed mixture that lingered like dark melted caramel. And like Ettore before me, I was tempted to record its memory by leaving my glass unwashed.