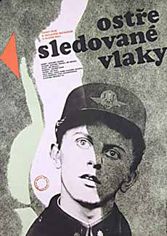 The Czech film renaissance had World War II to thank for vignettes that helped form potshots at authoritarianism. Wartime train-station apprentice Milo Hrma (Václav Neckár) is desperate to lose his virginity. He makes various bumbling advances at Masa (Jitka Bendová), a flirty conductor, but flubs it. Further efforts prove more frustrating as he must also endure the ribald antics of stationmaster Hubicka (Josef Somr). Finally, he manages to bed Victoria, a Resistance fighter. Suddenly, mirthful Milos is enlisted to help blow up a Nazi train.

The story is innocent, funny, and ultimately apolitical. What’s deliciously subversive is the idea that good sex (or just sex) is lubricant enough for Milos to do something with his life. Blowing up the train is both young love’s labor and a rite of passage.

Though director Jiri Menzel always denied he was protesting anything, Milos’ Resistance antics transform him. He becomes the opposition’s grateful agent. This black-and-white gem won the 1968 Best Foreign Film Oscar.