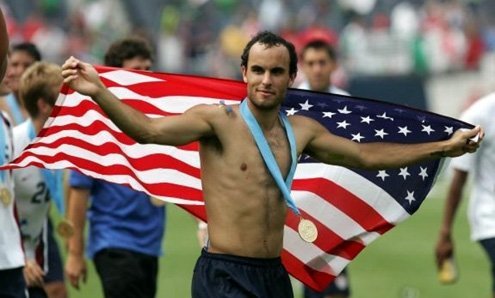 ust as the afterglow of Barack Obama’s election victory seemed to dim, an early sign that the next U.S. president might in fact be the Messiah appeared at FIFA’s Zurich headquarters. A smaller signal surfaced when German papers yelled “Yes, we can!” after prodigal prodigy Landon Donovan, America’s top footballer and a former flop in Europe, tried out impressively for Luca Toni’s Bayern Munich.

For long-beleaguered American soccer fans, as well as for the long-suffering, reality-based world at large, the dark pall of the Dubya Years is already slipping away. The change we need may be close at hand.

What does soccer have to do with the White House? Unfortunately, politics do play a subtle, insidious role in the international game. The World Cup hosts usually enjoy decisive favor (South Korea in 2002), while the out-of-favor are often castigated when (penalty) pinch comes to shove (U.S.A. in Germany, 2006).

But for America, the times they are a-changin’ — on and off the pitch.

Baby steps toward the coming international “rehabilitation” of the United States (and a shot in the arm for struggling U.S. soccer) were heard recently in the Swiss banking capital. A “highly placed” FIFA official told Yahoo Sports that the global cup of Obamamania so runneth over that it might land America the coveted right to host the 2018 World Cup.

“How can it not make a difference?” the official asked. “Now when you think of America, you don’t think George W. Bush or war, you think of this man, Obama, who has made history and given hope to millions. The men who vote on World Cup hosts are not immune to those same feelings. If the U.S. bid stacks up in terms of infrastructure and organization, then Obama could be a huge factor.”

As a football fan who learned to love the game in Italy, I’ve long hoped that soccer would take firmer root in America. Not only because I love it. Every step America takes toward soccer is a step away from self-isolating exceptionalism. To engage in the world’s most popular sport, on a level playing field with countries rich or poor, is to be more fully and fairly part of the community of nations. Little speaks more loudly against “unilateralism” than Americans competing in and caring about the World Cup.

Soccer is a global passion and language. If Americans don’t speak it, they’ll remain partly tone deaf to the world. To improve their fluency, however, they need to play more. Which is what they’ve been doing since hosting the 1994 World Cup and the steady growth since then of Major League Soccer (MLS), the U.S. league that England’s David Beckham joined two years ago (only to bail on brief loan to AC Milan).

For years, European friends have asked me, “Why doesn’t soccer take off in the United States?” I reply that it is taking off, gradually, from the grass-roots to the MLS, whose business model, until recently at least, was based on the low-cost development of American players rather than shelling out millions on expensive foreign stars — an approach that bankrupted its predecessor, the 1970s North American Soccer League (with hired guns Pelé, Cryuff, Beckenbauer).

Now, after 13 years of the MLS, U.S. soccer is approaching critical mass. As getting Beckham showed, the league now has the means to import foreign talent. Meanwhile, U.S. players are getting better and better, with more and more plying their trade in Europe, although none is close to being a star. The question is no longer why football doesn’t take off in America. It’s when will U.S. soccer start to match up with the very best, with Italy and Brazil and Germany and Argentina, and make a run for a world title.

I know. I can hear the Europeans scoff. But already at the Under-20 World Cup level, U.S. teams have been playing and beating the best, including a 2-1 victory over Brazil last year led by future stars Freddy Adu and Jozy Altidore, who recently bagged his first goal for Spain’s Villarreal. A scruffy U.S. team reached the final eight of the 2002 World Cup, en route beating both Portugal and Mexico. In 2006, the USA, down to nine men, was the only team to take a point from Italy, the eventual world champions.

Of course, from here to competing for a title could take an eternity. But that’s where the new White House tenant comes in. If, as the FIFA official suggests, Obama’s popularity could help bring the 2018 cup to American shores — a decision that would be announced in 2011 — that would further advance the game in the United States. Hosting the 2018 Cup would also give the U.S. a gilt-edged chance to make a title run — eased, perhaps, by the easy credit traditionally afforded the host nation.

But that’s a long way off. In the meantime, America also needs a star — a world-class player capable of arousing the passions of kids back home and the respect of the game’s powerhouses. The 26-year-old Donovan, who scored 20 goals alongside Beckham last season for L.A. Galaxy, was long seen as America’s most likely candidate for stardom. But that was before he chose Manhattan Beach over Bundesliga ball.

Now, a new Donovan seems finally ready to take the plunge. And after fleeing Bayer Leverkusen twice for California comfort, Donovan now has a major backer in Juergen Klinsmann. The former Germany and current Bayern Munich coach, who lives in Los Angeles, thinks he can get the best out of the speedy little forward. “He’s the best player in North America, including Mexico,” Klinsmann said during Donovan’s recent tryout in Munich.

Signing him would be a risk, no doubt. But Donovan, voted the best young player at the 2002 World Cup (a prize shared with past greats such as Pelé, Cabrini and Beckenbauer), has never lacked for talent. Instead, lack of confidence slowed down a prodigy who grew up in a country that not only shunned the world’s leading sport, but often ridiculed the boys who played it as effeminate — if not un-American.

Along with Karl Rove and the Southern strategy, those days are over. With vision and pace to burn, Donovan would be a perfect partner for Toni, Italy’s towering frontman. But can a beachcombing Cali boy really become a Bundesliga star? Call it climate change, but even cynical Germans now believe. A recent headline over a Donovan story in Bild, a German tabloid, yelled it out loud and clear: “Yes, we can!”