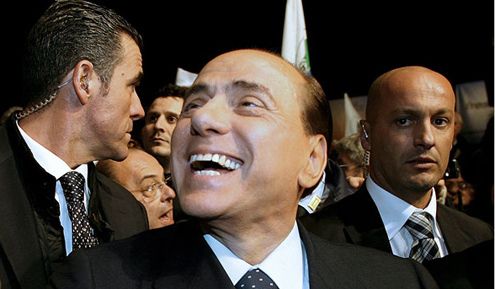 Berlusconi is the colorful haggler who won’t go away.
F

or decades, three pre-enlightenment presidents lorded over global sports. They were soccer’s João Havalange, who ran FIFA; International Olympic Committee chief Juan Antonio Samaranch; and Primo Nebiolo, the boss of track and field’s IAAF. Each was a praetorian, a L’Ètat, c’est moi son-of-privilege who insisted he was right and demanded that peers and underlings submit to a rightness inevitably advertised as best for each organization.

Democrats in name alone, they manipulated, pandered, browbeat and seduced. Samaranch’s preferences were central to the selection of Olympic cities. Nebiolo once demanded the king of Norway sit to his left at a track meet in Oslo, reasoning that he was the organizer and the king the interloper. In the 1990s, Havelange confronted reformer Pelé, who sought the overhaul of Brazilian soccer, and derailed him.

Paying a visit on Samaranch in Geneva or Nebiolo in Rome was a substantive event. Nebiolo’s taste was opulent and palatial, Samaranch’s more corporate. It is no surprise all three men were of Latin origin: Havelange a Belgian-born Brazilian; Samaranch a Catalan Spaniard; Nebiolo from Turin. Personal preference, not consensus, drove their decisions. Fairness, when it emerged, arose mostly from sentimentality. Old loyalties were rigorously respected. Corruption meant little when introduced in the name of need. They were divisive, charismatic, often petulant figures, rich volunteers who erupted from a time of self-righteous dictators.

Sports’ now-forgotten power troika (Havalange is 93, Samaranch 87; Nebiolo died at 76 in 1999) matters because particles of each have long existed in a younger man now seeking a political comeback, Silvio Berlusconi.

Berlusconi’s seasonal appeal has less to do with politics or even ideological concerns than a Latin predisposition to the allure of self-assured loudmouths. Those who deplore him — and many do — know why: He’s an ostentatious throwback to me-first hubris. Those who embrace him — and many do — see this pomposity as strength, or at least as an antidote to the spinelessness encumbrances of consensus.

While Spain and Portugal — Italy’s Latin EU neighbors — are only a few decades removed from authoritarianism (Greece had a military junta until 1967), post-Fascist Italy is situated halfway to modernity, tugged ahead and backward at about the same speed. Progressives seek social and electoral reforms but can’t agree to take on unions, which is tantamount to self-subterfuge; rightists suggest the way around logjams is to work within the status quo, but run by them.

With the failure of the latest center-left experiment, some Italians find themselves attracted to the familiar. Berlusconi is electable in part simply because he is, which is to say he endures. In that he reflects a long tradition of Italian politicians nourished by comebacks (Christian Democrat Amintore Fanfani, like Berlusconi a small-statured, stubby man, was prime minister in the 1950s, 60s, and 80s; “If you throw him out the door,” it was said, “he comes back in through the window.”)

More importantly perhaps, Berlusconi wants badly to return, a peculiar kind of political vanity that suggests if you care so much about a woeful system to want to run it you’re probably a rung above the besieged and cynical everyman. Tanto di capello, or hat’s off. Buffo, dumb, but hat’s off.

More than ever, Berlusconi — wrinkles unscrambled, pacemaker inserted —reflects Italy’s backhanded respect for the shrewd veteran who (if allowed) will cut through (or rearrange) red tape. Success is heroic, failure the fault of communists or magistrates. He can literally embody the state as either Caesar or victim. It’s a winning kind of anti-intellectual superficiality that helped the sports troika deflect attention from their own shortcomings. A host city, and not the IOC, was to blame for any chaos; an enemy of Nebiolo, not the IAAF, caused misunderstandings and mishaps. Success, in turn, was the stuff of expensive banquets, where favors were rewarded and outstanding debts paid back.

Time and again, foreign reporters explain Berlusconi’s success by citing a vacuum. “There’s nobody else, and he’s very popular,” according to Paolo Guzzanti, a Forza Italia senator quoted recently in The New York Times.

But Berlusconi’s filling of a vacuum doesn’t explain him or the space he occupies. Before him came his mentor, Bettino Craxi, a money-hound Socialist who controlled the 1980s (and helped spawn Berlusconi opponent and former Rome Mayor Walter Veltroni, then a Communist deputy). Before Craxi was a another troika, this time composed of Christian Democrats Fanfani, Giulio Andreotti, and Aldo Moro, who between 1954 and 1992 ran 10 of Italy’s 61 governments. Moro in particular was so persistently galling to the extremist left that its Red Brigades offshoot kidnapped and murdered him 30 years ago.

Every Italian generation has a space-filler, a figure who straddles the impossibly wide divide between non-enlightened past and inchoate future, a chasm Italy has always been reluctant to cross for fear of what might be left behind. Berlusconi is merely the latest holder of the ferry keys. His promise is to keep the boat at the ready but idling. It’s not a pretty or comforting one promise but — to borrow from Italian hymnal resignations — “it is what is.” It has an ID. It emits the known in much the same way Havalange, Samaranch and Nebiolo did on behalf of non-North American sports in the final quarter-century of the millennium.

Recently, the Zurich-based International Relations and Security Watch published a piece suggesting that Italian economic woes and bad governance might be cause to call Italy a ”failed state”, or at least to redefine the concept of such failure within the context of affluent nations. It’s an interesting notion until you accept that failure’s central component is lack of choice: Most failed states can do little about their collapses. Italy, by contrasts, stage-manages its own twilight. It milks cyclical downturns for drama. And it creates drama to produce political adrenalin, without which a state unaccustomed to civics has no reason to be. Berlusconi perfectly fits such a paradigm, a colorful haggler who won’t go away: a nagging parent, a fussy uncle, a ridiculous and pompous in-law. But foremost an insider.

Samaranch was once asked why he hoped Nebiolo, a cobra-like rival, would keep his position indefinitely. Without missing a beat, the Spaniard replied, “Because I know him.”

Italy knows Berlusconi, and knowledge is safe harbor in a storm.

— Christopher P. Winner is editor of The American. He was press spokesman for the International Amateur Athletic Association from March 1994 through July 1995.