Clemente, The Passion and Grace of Baseball’s Last Hero 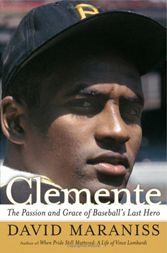 Roberto Clemente, arguably the best Latino baseball player of the 1960s, died in an air crash while trying to ferry supplies to Managua following the devastating Nicaraguan quake of 1972. In this sympathetic biography, David Maraniss (who has written about about Vince Lombardi, see below, and Bill Clinton) resurrects the legend of a proud and moody Puerto Rican who relied on skill, pride, and guile to redraft the image of Latin American players in the United States.

His death, at 38, gave him larger-than-life status that Maraniss respects while portraying an enigmatic figure who defied cultural stereotyping and eschewed the norms of early celebrity culture. Some anecdotes are painfully lovely: for example, in 1950s Florida, Vic Power, the first black American Puerto Rican player, was refused service by a waitress who told him the restaurant did not serve negroes. “That’s OK,” replied Power, “I don’t eat negroes.”