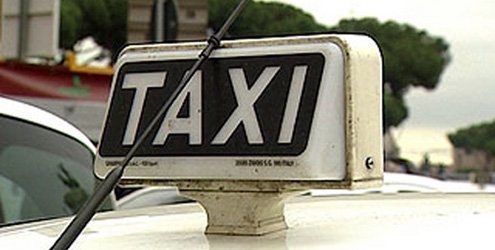 r. Matteo thinks Hillary Clinton wants to sleep with Barack Obama, whom he calls only (and rather amiably) “Il nero” — “the black one.”

Clinton — which he pronounces CLEAN-tom — “gets agitated around him — tutto spiritosa — as if to say, ‘Let’s go into the bedroom and I’ll really show you how it’s done!'”

Mr. Matteo, my cab driver, can’t get enough of American politics. Before cell phones and talk radio, Rome cabbies never shut up. These days they tune out. Between soccer debate and Hal 9000-style satellite navigation, in-car volume is often high.

But Mr. Matteo is retro and restorative. He is a trim 68, does not belong to a radio co-op, has no radio in his car (a rarity), and no mobile phone (an even greater one). Old school, he’s his own music.

And, given his age, I assume a fan of George W. Bush.

To his question, “Che arte fa Lei?” the antiquated, polite form of “What do you do?” I answer “giornalista” tantamount to signing a consent form for my living ear. He can now loosen up.

Like the better part of America (or so it seems), Mr. Matteo is stuffo, “fed up” — the worst kind of public disenchantment in Italy. “Look at what Bush has done. The world is in a state of endless disorder, there are 5,000 dead young people, tens of thousands of dead on the other side… a country has been devastated. Che tristezza!”

It’s time for CLEAN-tom or “il nero“to fix it up. “If only America would decide. Why can’t they decide?”

I remind Mr. Matteo about John McCain, the Republican nominee.

It’s not a name he knows well. “Il vecchietto?” he asks.

Like many of his working class contemporaries, Mr. Matteo mistakes the Democratic primaries for the general election, transforming the Obama-Clinton clash into a presidential claim. He doesn’t understand McCain’s role, and I explain.

But the explanation disappoints and annoys Mr. Matteo. Why so many layers? Why must it all be so complicated? I can’t answer. We’re now stuck in traffic. Tempers flare. Which naturally leads back to Bush.

“Bush likes the Chinese. He likes them even though they have declared a commercial war on us!” Furbi, he says of the Chinese: Clever. The Chinese — like all persistent and diligent peddlers of the cheap — are blue-collar Europe’s monolithic enemy. They’re the opportunistic poor threatening a recently-made middle class. Industrial Revolution Jews preceded them. “The Chinese have declared war without even firing a shot.”

But Mr. Matteo has no pogroms in mind.

Much as China bothers Mr. Matteo, it’s not central. China, friend or foe, is bereft of personality, without which rage is abstract. The Chinese are not literally at the gates.

What, he asks instead, do I think of “il nero?”

I demur. It’s a rhetorical question. After China, I gird for the worst.

“I like ‘il nero,'” says Mr. Matteo. “He’s elegant, he knows how to talk — recita bene — and he’s not a fanatic. CLEAN-tom tries to push him and to push him some more. She feels that she’s protected by her husband — protetto dal marito — but lui, il nero refuses to be provoked. She wants him to quarrel but he won’t to it. He’s very smart.”

“Look at CLEAN-tom whenever she’s been with ‘il nero‘ … her eyes became big, as if she wished she could take him behind closed doors to shut him up…”

Who, he asks me, is really ahead in the race. It puzzles him.

Not just him, I reply. Obama is ahead, I tell him.

“America could use a man like him,” says Mr. Matteo. “We’re not living in the old days when color mattered. It’s how you present yourself to the world that matters. CLEAN-tom is too aggressive. So is her husband. Dico bene?”

Il nero, he repeats, never gets flustered. He has equilibrium —”equilibrio, dico bene?”

So race really doesn’t bother him?

Not at all, replies Mr. Matteo. Why should it?

“We’re all getting whiter anyway. It’s diet. We eat and become whiter… or darker.”

We’re past the worst of the traffic. The next time, he smiles, I’ll have to tell him about il vecchietto.