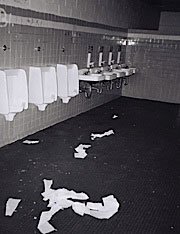 Does the principal use school bathrooms? If so, what does that say about her home?
I

n May, I followed a testy newspaper exchange between Francesco Giavazzi, who teaches economics at Milan’s Bocconi and MIT, and the principal of Milan’s Liceo Beccaria (May 11 and May 16, Corriere della Sera). Responding to criticism about the sad state of her school’s bathroom hygiene as noted by lecturers during an international economics forum, the principal dissembled (as Giavazzi guessed she would). She said emphasizing sanitary facilities merely demonstrated contemporary society’s misplaced priorities: It was image over substance. Why not instead criticize the school library or the archive? she asked.

The matter drifted out of mind until my 25th college reunion, when I recalled how a lavish floral arrangement on a library circulation desk and refreshed regularly was instrumental in helping me pick my university. Whatever Liceo Beccaria’s principal might think, symbolism matters.

Those flowers won me over (I am now a devoted alumnus). Their color and perfume enriched each day and made the act of studying into both pleasure and privilege. They told students that they deserved lovely settings. Since flowers honor rites basic to human civilty, they helped consecrate and celebrate learning, sealing the contract between college and students to respect and care for each other. Their symbolism told two of America’s most visible women — Hillary Clinton and Madeleine Albright, like them or not — that they deserved to succeed in an antagonistic male world.

What message does messy bathrooms and poorly-maintained facilities send to students? They just beg questions. Does the principal use school bathrooms? If so, what does that say about her home? Are her bathrooms cleaned for guests? Does she use those? If her home hygiene is pristeen, how can she reconcile personal cleanliness with the unsavory reality faced by her students? The word contempt comes to mind.

I’m sure she makes her home clean for guests; if not, she’s unique in Italy.

But if she does tidy up as a sign of respect for visitors, she is disingenuous to expect that school visitors don’t expect similar respect in an institutional setting. If she worries that guests might demean her as a manager and a mother if her home is unkempt, she shouldn’t be surprised if visitors question the quality of teaching in an institution where the cleaning staff doesn’t do its job.

And what about the notion that image and substance are antithetical? Here’s a consideration:

Italians are proud of their ethnic ties to former New York City mayor and 2008 presidential candidate Rudy Giuliani. Maybe their school officials should also listen to him. His “broken window theory” was just as important as “zero tolerance” toward crime in turning around New York’s image (and its economy). The broken window theory says decay generates delinquency; if one window is broken, breaking a second is that much easier. Giuliani’s clean-up showed citizens that local government cared about their basic needs and created a climate in which delinquents felt less sure that crimes would go unnoticed. Times Square may be less colorful, but New York is safer. Whatever else they may feel about him, New Yorkers respect and even admire Giuliani for this position.

Perhaps if Beccaria’s principal followed Giuliani’s example of making image and substance work together she might resolve the other “tante difficoltà” (her lament) that afflict her school. She might learn from my college’s floral contract.

The country’s youth, pilloried by the Italian media for its disrespect, alienated by the politics of immobility, might also get a boost. Lack of values may make the young frivolous, but what are they to think if their elders fail to give them a clean place to groom their self-esteem? If youth sees messy government institutions what does that say about their own future?

And what, finally, about the idea that a library matters but a bathroom doesn’t; that one is substance and the other image? The fact is that they’re both essential. In a bathroom, cleanliness isn’t merely a matter of image, it supports public morale and affirms respect for public health and hygiene.

Instinctively judging people and situations based on passing details is a basic human trait. As Malcolm Gladwell notes in his book “Blink,” it’s also a survival instinct. Coco Chanel once said, “If we can’t judge by appearances, what can we judge by?”

The key is acknowledging that appearences have their own depth.